The topic of my study was: ‘Reducing antibiotic use in pig production – is there a need for systemic change?’. During my scholarship, kindly sponsored by AHDB Pork, I met with pig farmers, veterinarians, industry organisations and government representatives in Denmark, Sweden, Finland, the United States, Canada, Australia and the UK in search of antimicrobial stewardship best practice. 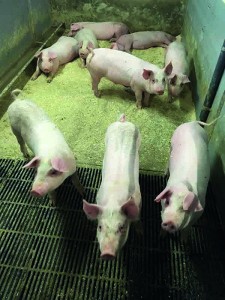 The management and hygiene practices that contribute to good control of infectious disease are already well-established. Remember the Madec 20-point plan? Published in the late-1990s when pig industries worldwide were grappling with PMWS and PDNS, it is considered to be the blueprint for achieving good pig health through proper management. It encourages all-in, all-out management, minimal mixing of pigs, keeping pigs in small groups with solid divisions between pens, reduced stocking density, strict cleaning and disinfection protocols… the list goes on.

However, I concluded that farm businesses need to take greater consideration of human behaviour in their efforts to effectively control disease to ensure the appropriate practices are implemented.

In Australia, I met with a vet called Peter McKenzie, who is a strong advocate of ‘health by stealth’ – improving pig health through good management, rather than reliance on medication. We talked about change management, a structured approach to implementing change that pays particular attention to the people involved to ensure it is successful and lasting.

I wonder how many unit managers have lectured their staff about the importance of good biosecurity and tried to introduce new measures, only to find that a week later things have returned to normal?

When I met with Rob Moore, co-founder and director of not-for-profit organisation Behaviour Change, he explained that potential losses often resonate more loudly with people than potential gains. Therefore, explaining to farm staff that using too many antibiotics could risk certain diseases eventually becoming untreatable and lead to an increase in pig mortality is more likely to hit home than telling them the business will save money by using fewer antibiotics.

Getting people to think it was their idea can also encourage them to change their behaviour. Researchers at the University of Bristol and Royal Agricultural University advocate the use of participatory farmer-led groups to help farmers tackle topical issues. This approach puts farmers in the driving seat and encourages them to come up with solutions and then go away and implement them.

This really engages farmers and, in my opinion, has a better chance of success than the traditional top-down style approach to knowledge transfer whereby an ‘expert’ or farm adviser talks at groups of farmers.

Farm owners and unit managers could try this approach with their farm staff. Get them in a room, explain why it’s important to minimise the use of antibiotics on the farm and then ask them how they think the farm could do better at preventing disease. Once they have come up with a list of actions to improve biosecurity on the farm, set them the challenge of implementing them.

This will engage them much better and encourage them to take ownership of the problem.

I also looked at endemic disease and a key conclusion of my report is that the UK pig industry needs to focus more on reducing persistent production diseases like PRRS and enzootic pneumonia (EP). The Danish, Swedish and Finnish pig sectors all have national schemes for monitoring key production diseases and these provide an excellent foundation for good pig health, resulting in reduced reliance on antibiotics.

Sweden and Finland are in the envious position of being free from Salmonella and PRRS, while swine dysentery is rare. Therefore, their national disease surveillance schemes are mainly focused on maintaining low levels of endemic disease, rather than on reducing disease levels. Nonetheless, I was impressed by their commitment to disease surveillance, with both countries having a dedicated organisation for overseeing animal health, funded by industry. I was also really impressed by the Danish Specific Pathogen Free (SPF) system which has been described as the ‘back bone’ of Danish pig production. Farms wishing to join the system must undergo a full depopulation/repopulation programme and sign a written agreement to follow the ‘SPF Health Rules’. These include requirements around biosecurity, health inspection, trade of pigs between farms and transport of pigs.

The key strength of the SPF system is its transparency. A database of all pig units in Denmark is held by SEGES, a private advisory/research organisation owned by pig producers and part of the Danish Agriculture and Food Council. Anyone can search the database for the health status of a farm.

There is even an online tool which plots pig units onto a map for easy visualisation of proximity to other units. A new feature of the map is the inclusion of a figure indicating a farm’s risk of reinfection with PRRSV or M. hyo, which comes in useful when producers are deciding whether to invest in restocking with SPF pigs.

This transparency means buyers of breeding stock and weaner pigs are able to source sensibly, according to their own farm’s health status. Buyers of SPF pigs also receive a formal ‘Health Declaration’ containing additional information about the health of the purchased pigs beyond the listed diseases, including Salmonellalevels and clinical signs of other diseases.

Not only has the SPF system helped many pig units in Denmark remain free from certain diseases, it has delivered improved health in the industry. In 2007, approximately 77% of nucleus and multiplication herds in the scheme were negative for PRRSV, compared with 100% today. Likewise, the proportion of PRRS-negative production herds increased over the same time period from around 55% to nearly 75%. This has largely been achieved through farms destocking and restocking with SPF pigs. The system has also resulted in an increase in the proportion of EP-negative breeding herds, from 45% to 70%.

So, I would strongly recommend the development of a national pig health improvement scheme in the UK that makes better use of surveillance data and diagnostics and operates with transparency at its heart. Improved knowledge of the health status of farms would facilitate more targeted control programmes and help ensure that when pigs are moved between farms they are not accompanied by unwanted infectious diseases. Importantly, the scheme needs to be sufficiently well- resourced to ensure it can operate long-term and across the entire industry.

If my vision becomes a reality, I would urge all producers to engage and not be frightened of talking about their disease status – because the end result could mean reduced reliance on antibiotics and healthier, more productive pigs.