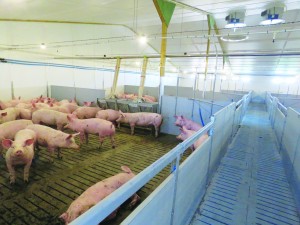 The Warkup finisher building has three rooms each with eight pens

The new Warkup finisher building, meanwhile, has three rooms, each with eight pens, that take one week’s worth of pigs – there’s also some 10-year-old finisher accommodation on the unit which is still working well and takes the rest of the pigs. Through investment in genetic, nutritional, health and management improvements, numbers produced have increased considerably to 28/29 pigs per sow per year, and the intention is to build another finisher unit to handle the extra production.
Skov ventilation is being used in the new buildings and this seems to be working well. And it’s anticipated that the growth of the stock, produced from the JSR GC900 boar, will see the finishers reaching 115kg liveweight at about 22/23 weeks.

Slurry separator
A dry slurry pump – which was quite expensive to put in, but was installed to also accommodate the third new building when it comes – carries the slurry from the new buildings about quarter of a mile to a separator; the liquid portion goes to a slurry store.
A tank at the side of the farm’s loading ramp captures wash-down water after loading, and this is emptied when necessary and taken by tanker to the slurry store.
Nutritional advice for pigs larger than 12kg comes from Harbro, which actually mills rations for the unit on one of Patrick Dean’s arable farms, and the feed is brought in by trailer. The creep and sow rations are supplied by ForFarmers.
Another thing the unit has had to do, to satisfy the local water company, is to install a water pump. This boosts the mains supply, but more importantly helps avoid any backflow from medication in the farm’s water tanks.
As you approach the unit, you’re faced with a security gate, and as feed lorries or livestock lorries arrive, the vehicles are disinfected on entry. I am seeing more and more of this sort of thing, and wonder when it will be on every pig farm.

Sam Walton is a Yorkshire farmer and former pig producer, and the founding editor of Pig World.