The AM Warkup technology was first featured at AHDB Pork’s 2015 Innovation Conference and, after interest from Harper Adams University, it has part-funded the project to investigate the effects on dust and pathogen levels in the air, pig performance and pig health.

“Potentially, it’s very exciting for all sectors of livestock production,” said Harper Adams University livestock unit manager Richard Hooper. “It’ll not only take out the pathogens but also the dust, improving the air quality that the animals and livestock workers breathe. There could be wider benefits for the environment in reducing emissions from a building and also reducing odour.” 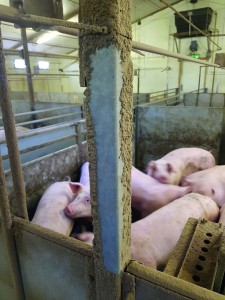 The EPI equipment, set up in a finisher room at Harper Adams University, only used around 2p worth of electricity per pig over 14 weeks

The trial involved pigs during the grower/finisher period from 12 weeks of age to finishing at approximately 22 weeks.
Two finisher rooms at the Harper Adams University pig unit were selected, one as treatment and one as control. The rooms were identical, housing approximately 350 pigs in 14 pens, fan-ventilated (SKOV), slatted and representative of modern indoor pig units. The unit was EP-positive and all pigs were vaccinated for EP.
The treatment room was fitted with the EPI equipment and a live feed was fitted with an electricity data logger so its on/off status could be logged and recorded, along with its energy consumption.

Data measured in the EPI room and the control room:
* Temperature and relative humidity
* Dust
* E.coli/gram negative bacteria (both in the air and falling to the floor)
* Energy consumption in each building via cloud-based monitoring
* Ventilation rate
* Pig numbers
* Pigs were identified and weighed individually at:
– Entry (10 weeks of age)
– Week three
– Week eight
– First draw
– Second draw
* Feed use was also recorded to allow feed conversion ratio to be calculated on a pen-by-pen basis
* Pleurisy and pneumonia scoring (using the BPHS system) was carried out at the abattoir by a trained veterinarian

In addition to the findings that pigs in the EPI room were 4.5 times less likely to have EP-like lesions at slaughter, there also appeared to be lower incidence of pleurisy. This is thought to be due to the significant reduction in both respirable dust and gram-negative bacteria shown, as these parameters have been shown to affect EP-like lesion levels in previous studies.
The equipment only used around 2p worth of electricity per pig during the 14-week period.

Harper Adams pig unit technician Fred Baker said of the system: “It is very straightforward to use as it’s entirely automated and it’s just a question of checking the lights on the control box to make sure it’s working properly. From a cleaning point of view, although the room is dirtier, it hasn’t taken any more effort to wash, aside from a bit of extra attention to detail in crevices and gaps where the dust has collected. The way dust sticks to the walls in the room gives a real appreciation of the dust we’re taking out of the air.”

Mr Charman, (pictured, right) added that, although it was a standalone trial looking at two rooms on one unit, it was as ‘robust as scientifically possible’. The data has been analysed by statistical experts.
“The further batches that are being examined will add additional power to these analyses,” he said. “The key point is that it appears EPI caused, or at least significantly contributed to, a marked reduction in EP-like lesions. This was in finisher animals on a pig unit that is representative of many in the industry today and routinely challenged by this common production issue.

“In an industry that is currently under large amounts of pressure to reduce veterinary interventions and drug use, innovative and novel technologies such as EPI potentially have a role to play.”

Aside from the improvement in respiratory health for pigs (and, potentially, stockmen), this project could show several other benefits, including a reduction in trimming of carcases and condemnations at the abattoir due to fewer cases of lung disease and pleurisy.

There may also be a reduction in local pollution, including ammonia, to the atmosphere, soil and water and EPI could be an alternative option to air scrubbers. 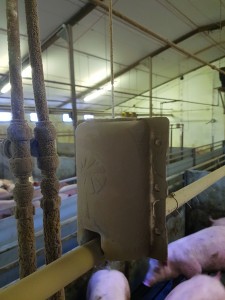 Electrostatic technology charges dust and bacteria particles, so they are removed from the air and stick to each other or to surfaces

Initially, ammonia was measured using basic monitors, which seemed to show that it was marginally higher in the building where the EPI was installed (but below levels that are believed to impact pig performance). It is possible that this was due to it remaining trapped in the building within the dust and therefore not being emitted to the environment. If this is the case, then ammonia levels could become far more manageable – controlling and disposing of it could become part of the routine wash down procedure, negating the need for costly scrubbing equipment, for example.

Mr Charman added: “We hope there may be lower capital and operating costs than with alternatives and, because EPI is more flexible, it has the potential to be retrofitted to existing installations to address local pollution matters. It’s not restricted to controlled ventilation buildings either.”

Producers were able to find out more about the trial and the technology at the AHDB Pork Innovation Conference at Pigs 2022 (www.pigs2022.com) in Solihull on June 7. The system will be available commercially after the event.
Contact Nick MacIvor at AM Warkup: [email protected]

The trial report has also been published in the Proceedings of the British Society of Animal Science, Advances in Animal Biosciences, Volume 8, Issue 1
www.cambridge.org/core/journals/advances-in-animal-biosciences