Bowel oedema was diagnosed through post-mortem examination, though not all pigs showed the classical oedema between the loops of the large bowel.
“It can be difficult to definitively diagnose bowel oedema. However, the farm was also known to be strep meningitis positive, which has some clinical similarities,” Mr Thompson said. 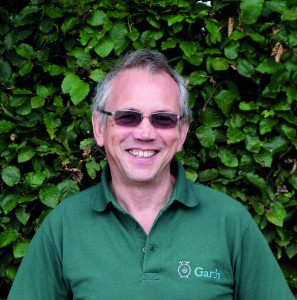 Cultures were submitted for laboratory testing, known as STEC-Check, funded by IDT Biolologika and carried out by SAC at Edinburgh. These were typed as positive for E. coli virulence factors F18 and shigatoxin, which causes clinical signs seen in bowel oedema, but not all isolates were positive for both factors.
“Bowel oedema can be difficult to confirm on STEC-Check test and multiple samples may be required to reach a diagnosis,” he said.

Initially, treatment was through antibiotics including colistin – not under restriction at the time – neomycin and florfenicol, mostly orally. No significant response was seen despite water-flow rate, feed regimes and hygiene being considered satisfactory.

All piglets were vaccinated with Ecoporc Shiga, supplied through Hysolv Animal Health, at four days of age, but some older pigs had, initially, to be vaccinated to reduce the time-span for the vaccine to impact.

“When the vaccinated pigs entered the system, the first batches passed the risk period with much lower mortality,” Mr Thompson said.
In fact, an analysis by pig industry consultant John Richardson showed that, by three months after vaccination was introduced, average post-weaning mortality fell to 2.5 per cent. Medication costs were also reduced, from an average of £1,393 per month to just £192.

“After years of the disease being a textbook rarity, we are not encountering bowel oedema on a regular basis“

As labour was considered a fixed cost, no extra expense was allocated to the physical task of vaccination.
Mr Thompson said: “Our client considered the vaccine highly effective.

“Oedema is now a re-emerging problem across Europe. After years of the disease being a textbook rarity we are now encountering bowel oedema on a regular basis. The causes for this re-emergence are not clearly understood. The disease can be frustrating to diagnose, as not all cases present the classical oedema of the bowel symptoms and proving the presence of the causative agent can require multiple samples.”

The drive to reduce antibiotics in livestock production and the possible withdrawal of zinc oxide from diets could reduce a vet’s armoury against a variety of diseases, Mr Thompson concluded. “Vaccination is certainly preferable to using medication as a control.” 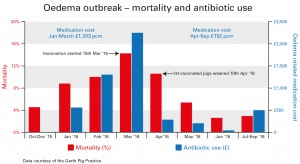