The goal is to help producers optimise the lifetime potential of their gilts through data analysis and farmer-to-farmer learning and, as a result, develop more profitable, resilient and robust businesses.

In January 2019, when members met to discuss both their own data and the wider group’s, it was clear that, as an industry, we’re losing far too many first- and second- parity sows – before they’ve made you any money. To put this into perspective, data indicates that we’re losing 25% of all culls at parity two and 65% at parity five.

On top of this, it was found that farm records were not detailed enough to be helpful for making management decisions. Common reasons given for young sows being removed or euthanised included ‘breeding failures’ (49%) and ‘miscellaneous reasons’ (51%). 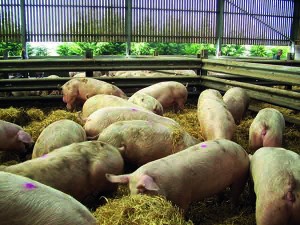 It was obvious that the starting point, before any changes could be made was to establish good record keeping. Capturing details of why animals are being removed from the herd, for example due to failure to cycle, poor litter size, udder integrity etc, was going to be essential. Without this, it is difficult to identify the root cause of any production problem and, for Gilt Watch, understand why young sows are failing.

The overriding message from the first year of the initiative was that it is vital to put in the groundwork, to ensure gilts get past their first and second parities, reach their full lifetime potential and, ultimately, give producers a return on their investment. Keeping accurate records on gilts has, therefore, been a key focus for the group during the last 12 months.

AHDB has been collaborating with AgroSoft and Stephen Hall, of Stephen Hall Management, to inform and encourage development of PigVision (formerly WinPig), a brand new way to analyse breeding herd performance data.

Producers have provided accurate and detailed data to AHDB to be analysed. This enables them to find out exactly what is happening in their businesses and to understand why animals are ‘dropping out’ before reaching their potential due, for example, to lameness, breeding issues and other factors.

Gilt Watch members have embraced the opportunity to help and advise each other.

Groups look at the facts together, on a local basis, then collectively suggest solutions that individual producers could implement to improve their systems and retention rates.

Lifetime Performance is Key
Last month, participants met for a second national meeting, where they heard from some of the top-performing producers in terms of gilt-retention rates, as well as Mr Hall and AHDB. It was an opportunity to find out how the group had performed over the past year and whether retention rates were moving in the right direction.

While the group is disappointed not to have seen the anticipated improvements in year two, they recognise that this is a long-term project with no simple quick fix.

Each producer is implementing a different set of management changes and it will take a full cycle of more than two years before the real impact will be seen.

Hidden Cost of Cull Sows
Mr Hall explained that gilts should be seen as a fixed investment. You can then look at lifetime output and establish some process controls, rather than looking at replacement gilts as a continuous investment, which get buried in the cash-flow.

At the meeting, Mr Hall emphasised that lost production and hidden costs build up over time. He said: “When does a sow become a cull? As soon as she starts to fail.

“Too often, figures are looked at from a continuous flow point of view, but this hides issues. You need to follow animals through their lifetime.”

What’s Next?
The plan for the next 12 months of is to continue to collect and analyse data from participating farms and for producers to meet up with each other locally to discuss figures and what’s working and not working for them. This is where the real value in the programme lies.

“Peer-to-peer learning is central to Gilt Watch and, over the past two years, we’ve been sure to allow time for this to take place,” said Jen Waters, senior knowledge exchange manager at AHDB.

“Producers have been very open with each other and they’re realising the benefits of sharing ideas and talking to each other about their businesses.

“The national meeting last month also gave producers from around the country the opportunity to discuss figures and ideas that might work for others.

“Gilt Watch has also been valuable in helping producers realise that they’re not alone, that others are also experiencing similar issues to them and they don’t need to feel isolated.”

In addition to the ongoing programme of work, AHDB is looking to move Gilt Watch to another level. Following an extensive review of research into gilt and sow retention, the plan is to help interested producers review current activities, identify those which can be made more efficient and implement practical solutions to improve retention rates and get more sows past parity three.

For those familiar with the concept, ‘Lean Management’ principles will be applied. This is an approach that supports continuous improvement with a long-term view that systematically seeks to achieve small, incremental changes in processes to improve efficiency and quality.

The activity won’t be restricted to existing Gilt Watch participants, so if you’d like to know more, get in touch with AHDB’s Ben Williams: [email protected]

Key to Success
Examples of indoor changes which have resulted in improved gilt performance:

Examples of outdoor changes which have resulted in improved gilt performance: