Developing digestibility
Using 48% crude protein soya meal, the standardised ileal digestibility (SID) was calculated for three different weight groups: piglets (<20kg), growing pigs (20-50kg) and finishing pigs (>50kg). The SID was 9% higher in the pigs heavier than 20kg than in those less than 20kg. These results showed that young animals needed highly digestible ingredients, and there should be a difference in ingredients used for weaned piglets versus growing/finishing pigs (Ball and Moehn, 2016).

We calculated the consequences of not taking digestibilities into account and have been able to show the benefit of formulating according to actual protein digestibility. In Table 1, a simple weaner diet is used as an example. Control diet A is based on wheat, whey, fishmeal and soya meal (48% CP), while in diet B the soya meal and fish meal is replaced with a highly digestible soy protein from Hamlet Protein. Both diets were balanced with amino acids, to a SID Lys of 1.40% and using the ideal protein concept. 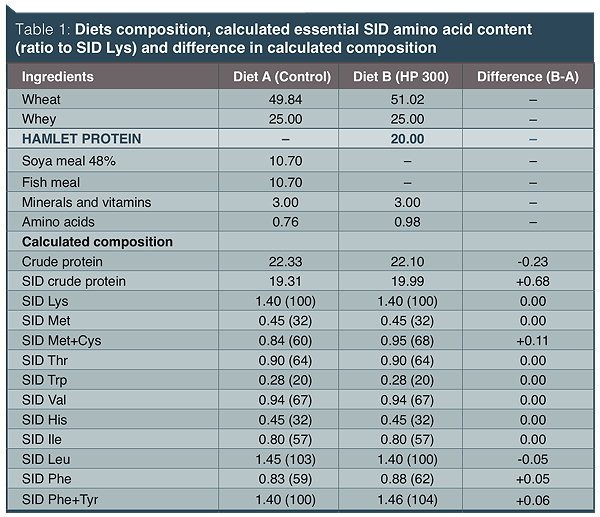 This undigested protein can be fermented in the gut by proteolytic bacteria, and stimulating these harmful bacteria brings a potential risk of an imbalance in the microflora with subsequent diarrhoea. Furthermore, the ammonia formed in the gut is absorbed and contributes to the nitrogen load, which has to be removed by the liver and excreted from the kidneys via urine; all of which costs energy and takes up capacity in the liver from other metabolic outputs, which will repress growth and possibly health.

The conclusion is that the indigestible content of raw materials doesn’t contribute to support the growth and health of young animals. It does, however, add to their health risks and maintenance costs.