The company has only been supplying pig equipment for about 18 years and has kept its focus firmly on feeding equipment. And it has also kept a firm control on the products it sells by making most of them on-site at Maldegem, which turns out everything from the smallest auger component to high-tech feeding controllers under the same roof.

Roxell makes everything you would need for conventional automated feeding systems. If you only want to keep feed hoppers full from a single bin, the company has the equipment in its range, but in 2001 it came up with a much smarter way to feed pigs. The MultiFast system it developed, which is distributed in the UK by Collinson plc, is based on the same general components as conventional systems, but with a few key enhancements: feed can be selected from multiple feed bins; the feed selected from the bins is batch mixed; and the mixed feed can be sent to a specific feeder in the pig house.

Managed by computer, this system gives Roxell the opportunity to offer pig producers control over a key aspect of their business by optimising the feed their pigs receive. Dubbed multiphase feeding, the system means the quantity of feed and the nutritional content of feed (in terms of lysine and energy) can be controlled down to individual pen level. Feeding different rations for pens split by sex can be easily achieved and, if required, the feeding regime can be easily modified to control growth.

Using Multifast, for the first time the unit manager can manage the ration provided to every pen supplied by the system individually. This removes overnight the massive labour requirement such a feeding regime would traditionally have required, and the potential for human error that exists in any manual feeding system.

It’s long been known that supplying the optimum diet according to a pig’s age and weight is key to efficient feeding. That’s why several grower and finisher diets will typically be fed, but the truth is that even with three specialist finisher rations, there will still be times when the feed either oversupplies or undersupplies the pig’s actual requirements (leading to nutrients being lost out the back-end of the pig and compromising performance respectively).

MultiFast multiphase feeding, however, allows almost an infinite number of rations to be fed that more closely match the pigs’ requirements. This means they’re fed as efficiently as possible without sacrificing growth performance. You could almost compare it to the difference between an old three-speed tractor gearbox or a modern infinitely variable transmission – with multiphase feeding smoothing the bumps between changes in rations.

Most producers operating the MultiFast system in commercial conditions are using it to feed conventional bought-in rations more effectively. They can have multiple bins to hold different rations for all the classes of stock on the unit and use the system to deliver the right feedstuff to the right pen at the right time. Most will also use the system to facilitate changes in rations; a feeding curve can be put in place to provide a smooth transition from one ration to another that will help avoid the growth checks that can occur when pig diets are changed.

But there seems to be no reason why the system couldn’t also be used for the feeding concept being trialled by IFIP in France (Pig World, July 2014) where just two diets – one best suited for the start of the growing period and one designed for the final stages of finishing – are being combined to produce the ideal ration for any stage of a finisher’s growth. Checking pig weights when they first enter the system, and ideally later during finishing too, to ensure they’re at the right point on the feeding curve, would be all that would be needed to operate this system on a commercial unit.

How does it work?
So that’s what Roxell’s MultiFast does, but how does it actually do it? The heart of the system is a blending-and-weighing unit that mixes up 50kg batches of feed at a time. It can receive ingredients from up to 20 bulk bins and mix them thoroughly, before dropping it into the feed delivery line to be sent to one of the pig unit’s feeders. 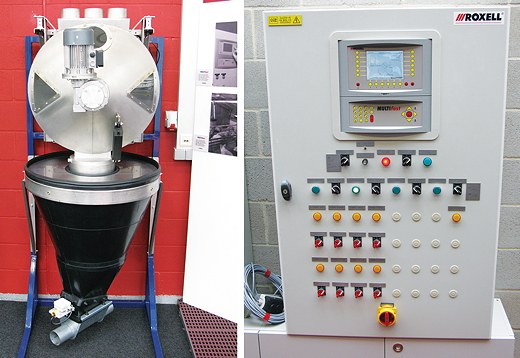 Left: This weighing and blending unit sits at the heart of every MultiFast system. It can mix up 50kg of feed at a time. Right: Roxell builds the MultiFast controllers in-house

All the components in the MultiFast system are managed by a computer controller that: recognises when a feeder needs to be refilled; looks up the feed ration and curve for that feeder; ensures the correct ingredients are delivered to the blending unit; and manages the delivery system to get the mixed ration to the feeder (the exit point from the auger to each feeder can be switched from shut to open to allow the ration to be either accepted or diverted to another further down the line).

And if that doesn’t sound clever enough, there can be as many as three batches of feed on their way to different feeders at any one time. The controller knows exactly where each batch is in the delivery system and will only open a feeder’s exit point when the correct ration arrives.

The MultiFast system has a maximum mixing capacity of about 2t/hr and most installations are designed to deliver about 10 to 12t every 24 hours – enough to feed 4,000 pigs. Suitable for installation in any format of buildings, the delivery system can utilise either a circuit design, with the feed pulled round a continuous pipe by a chain system, or a route design using augers to carry the feed.

As far as the pig is concerned, the most important part of the system is the in-pen feeder, and MultiFast is perfectly matched to Roxell’s BluHox ad-lib feeders. These strong, durable feeders have a simple feed-adjustment mechanism and are designed to enable maximum growth in optimum time. With models available for both weaners and finishers, the BluHox features integrated water nipples to provide fresh water at the point of eating to aid digestion and encourage greater feed intake.

Roxell’s UK distributor for MultiFast is Lancashire-based Collinson plc, which was established in 1962. The company’s core business is the manufacture of silos, which can be found widely on pig, poultry and dairy units across the British Isles.

With capacities of up to 40t, Collinson silos are recognised as a premium product with many innovative features developed by the firm. Naturally, the company also makes and supplies a full range of conveyors, feeders, weighers and cyclone dust collectors.

Roxell products offered by Collinson to the UK market include Dos7 and Dozit sow feeders, the BluHox grower and finisher feeders and, of course, the MultiFast multiphase feeding system.

Collinson has an ethos like Roxell with a focus on quality, it’s are driven by its vision and values to design, engineer and deliver products of the highest standard.

As well as its core agricultural products, Collinson has grown and diversified into the renewables and construction sectors. 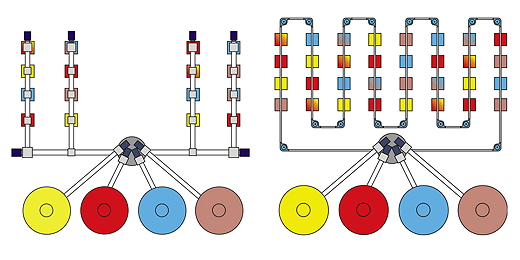 The MultiFast system is available in both route (left) and circuit systems to suit any building layout. It can deliver straight or blended rations to any feeder in the system