In an independent trial at Wageningen University, in The Netherlands, Cargill’s Neopigg RescueCare package has been put to the test. 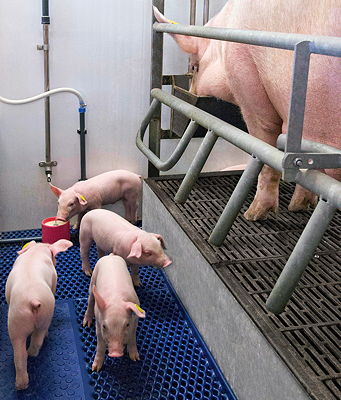 This package is a combination of patented hardware – a RescueCup that’s placed in each farrowing crate – and a unique nutritional package of a sow milk replacer and a liquid creep designed to be fed ad-lib through the cups.

The Neopigg milk replacer RescueMilk and liquid creep feed Smooth have been formulated through extensive research at Cargill’s Innovation Centre at Veldriel, also in the Netherlands.

The trial took two groups of 20 sows where housing, genetics, initial litter weights and management were uniform and ad-lib water was supplied to both. The control sows’ litters were fed ad-lib prestarter and weaner feed alongside sow milk. Pre- and post-weaning weight gains and days to reach finishing weights were recorded alongside the second group reared on the Neopigg RescueCare system. This group was fed RescueMilk, to supplement sow milk, and Smooth, as shown in Figure 1. This group also had access to the weaner feed from 21 days.

Lasting effects
Growth rates and dry matter intakes were recorded from birth to slaughter and sow performance data was noted up to weaning. The aim was to quantify the benefits of the Neopigg Rescuecare system.
Figure 2 shows the difference in dry matter intakes between the two groups of piglets with the data standardised using the control group as a baseline at 100%.

The results showed that intakes in the group fed Neopigg RescueMilk and Smooth were markedly increased above those in the control group. In the case of this trial, an increase in pre-weaning dry matter intakes of 355% was achieved. 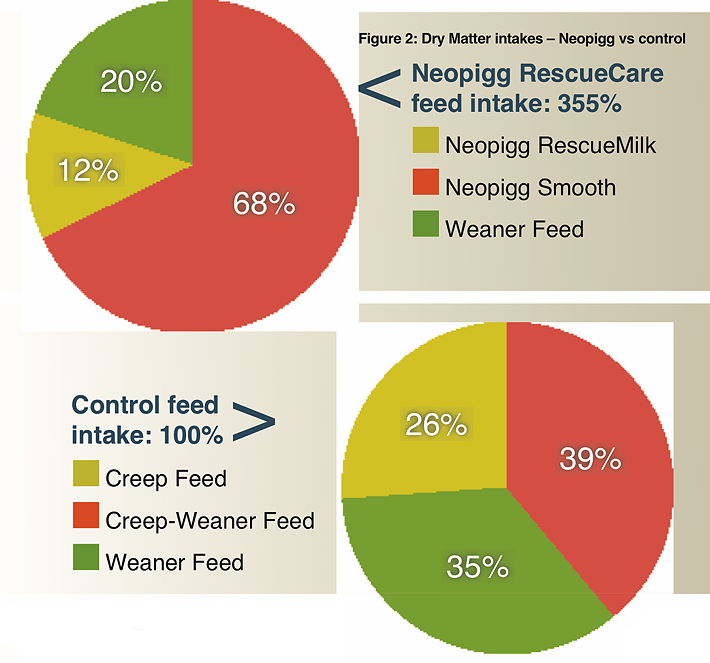 There was also a reduction in pre-weaning mortality of 2.1% and an improvement in litter index of 0.02.
No detrimental effects to the sow throughout the course of the trial were recorded; milk yields did not fall and there were no issues around lactational oestrus.

Post-weaning benefits
Previous work carried out by Cargill has identified that pre-weaning dry matter intakes make a massive 44% contribution to lifetime performance, as shown in Figure 3.

This is reinforced in the Wageningen trial, where post-weaning performance to slaughter weight of the two groups of pigs were compared. Those reared on the RescueCare system were slaughtered two days earlier and were 3.9kg heavier. 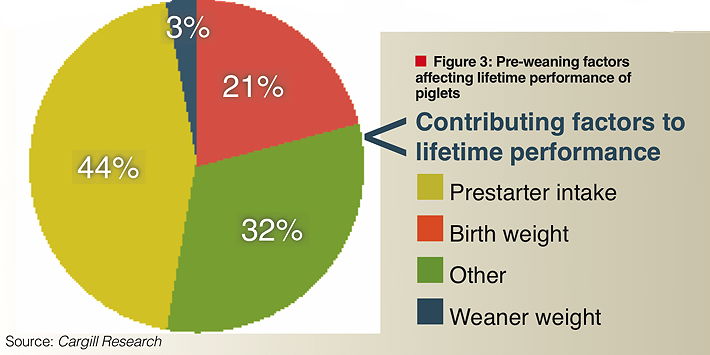 These pigs had the same FCR as those from the control group, and also showed a significant reduction in the use of medication during the grower and finisher stage.

It’s clear from the results that the RescueCare package complements sow milk and has allowed the pigs in the trial group to make a considerable step forwards towards achieving their genetic potential, not just pre-weaning, but for their productive lives.

Producer impact
The trial results showed that pigs reared on the RescueCare system had weaning weights 0.8kg higher than the control group, resulting in a 13.24kg increase in litter weight at weaning, and an increase in daily liveweight gain during the nursery period of 35g/day.

Additional benefits are possible from improved litter index and reduced mortality. Based on AHDB Pork average production data, this would give a 500-sow unit the potential to wean an additional 420 pigs each year.

If we use current UK market data, it would suggest that the NeoPigg RescueCare could provide an increase in profit per sow of between £25 and £30 annually based on increased litter index, reduced pre-weaning mortality and increased slaughter weights. This increase takes account of feed costs, and we estimate the payback on the RescueCup system for a 500-sow unit of between eight and nine months.