“I would be an awkward pillock again. I think people should challenge the status quo and the establishment but they should have something to offer of their own.

“I have no time at all for people who carp on from the touch line yet would never ever pull a shirt on and step into the front row – but thankfully NPA has been remarkably lucky in having an abundance of people prepared to step up, challenge and put a shift in.”

He was, of course, a prominent figure in the British Pig Industry Support Group (BPISG) that took on the fight for the crisis-hit pig sector in the late-1990s, targeting retailers with direct action, organising events that galvanised the industry and gained media attention, and engaging with Government. In fact, Mr Longthorp once famously engaged with Nick Brown, while hanging onto the windscreen of the then Agriculture Minister’s car, an incident they have laughed about since.

Out of that crisis came the NPA in 1999 and Mr Longthorp was part of the first elected Producer Group, going to become chairman of the organisation a few years later and then having a second stint before Richard Lister took over in 2015 – ‘the only person mad enough to do the job once, then come back for more!’ 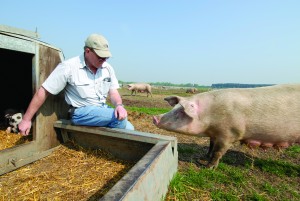 Over more than two decades, he has continued to represent the industry in his no-nonsense style, but has, he admits, softened his approach on occasions as needs must.

“The NPA has found that balance very well. No single action is ever responsible for the solution – it is incremental, the build-up of various actions and that will be the case as the industry looks for solutions to the current situation.”

Like Mr Lister, Mr Longthorp – also a Yorkshire farmer, who keeps outdoor and free-range pigs, with son Jonathan and daughter Anna now running the breeding and free range finishing sides of the business respectively – is delighted that his departure coincides with so many talented people standing for election to the PIG.

The decision was also driven in part with the compromises that come with having been diagnosed with Parkinson’s a few years ago, although it will not stop him continuing to play a prominent role in another passion – developing skills and training for the next generation of farmers.

AgSkills started when he joined forces with other prominent pig farmers in 1998, including fellow BPISG ‘renegades’ Meryl Ward, John Rowbottom and others, to set up a training business for their own farms. It grew and was eventually taken on and given additional resource by BPEX and then with AHDB taking up the skills mantle to serve the whole farming industry, with Mr Longthorp chairing the group.

The most recent incarnation is the development of The Institute of Agriculture and Horticulture, supported by Defra, and Mr Longthorp said he would ‘still very much be involved’. “Developing skills is so critical to the future of the industry. World class people producing world class food,” he said.

He believes the pig sector has a good chance to thrive outside the EU, pointing out that, unlike most other sectors, it has been operating without relying on subsidy support for profits for decades, while operating to the highest welfare standards.

NPA chairman Richard Lister described his friend and colleague as a ‘fantastic servant to the industry over many years, who was always very supportive and there for everybody’.

Mr Longthorp, awarded an OBE in 2011 for services to the farming industry,

acknowledged that while he may have given his time and energy to the NPA, the NPA and the wider industry has given a lot back.

“The NPA has been a remarkably effective organisation in terms of what it has achieved and how efficiently it has used its limited resources. It has given me lifelong friendships, but also a chance to do something useful,” he said.