“I know it is early days of me being back in the UK, but it is quite noticeable how many older-designed piggeries there still are around the country.
“Despite this, some good results are being achieved, indoors and outdoors alike. This can only be put down to good management and stockmanship (something I’ve noticed is the passion of farm staff), along with genetic improvement, nutrition and good health status on farm.” 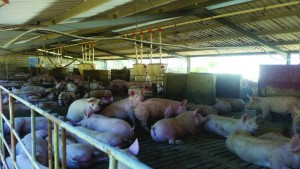 One change Mr Shattock has noted is the warmer climate – particularly in the south of England, which he estimates is around three or four degrees warmer than it was 20 years ago. While in South Africa, he became attuned to how variable temperatures can affect pigs’ wellbeing.

“In South Africa, farmers have had to design pig housing to cope with extreme temperature fluctuations in winter,” he said. “It can get down to -5°C, but then during the day it can get up to 26°C. It can be 40°C in the summer and then the pigs slow down and eat less, so we feed different diets in summer and winter. We also alter our stocking densities, making them lower in summer than in winter, yet still within animal welfare standards.”
Mr Shattock noted that all pigs are kept indoors in South Africa, although slatted buildings are open-ended with semi-controlled curtains, which allows a breeze through the building. He installed sprinklers on his unit’s finisher accommodation, which can be switched on manually to relieve peak periods of heat.

Investments also included an automated fully-controlled weaner house, but due to the unreliability of the country’s electricity supply, the unit scaled that back to a ‘hybrid’ system.
“The plus point is that it means staff walk through and look at the pigs regularly to see if they’re OK or getting hot,” he said. “Also, because we’re encouraging air flow through the piggery, the building side walls are a metre or so high and the rest are open with louvres. In our baconer unit, we have raised our floor levels, rather than going down, which saves excavation costs.”

Temperature changes are managed in the weaner house thanks to foam insulation, while reflective white paint on the roof reduces finisher accommodation temperatures by 3 to 4°C.
Most pig enterprises in South Africa need to have 1,000 sows or more to survive, but low debt ratios and growing its own maize helped Mr Shattock’s smaller business to compete.
A supply agreement with a family-owned abattoir 14 miles away also helps to keep transport costs down. 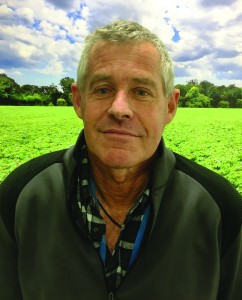 “In South Africa, farmers have had to design pig housing to cope with extreme temperature fluctuations” – Mike Shattock

Expansion: ‘stack’ system
In addition, they have worked on expanding herd size within the piggeries’ existing footprint at as low a cost as possible. Mr Shattock introduced a weaner ‘stack’ system in a converted baconer house by creating a set of plastic slatted pens on top of the walls of the original pens.
He explained: “We bring the weaned piglets at four weeks into the deck at the top, then at around seven weeks, move them down into the original pens underneath and they’re in there until about 13 weeks of age. The pigs underneath are basically heaters for the pigs above and when they’re first weaned into the top decks they have mats and infra-red heaters for the first week.”

These decks have added an extra 600 to 700 pigs, without expanding the unit’s footprint. He added: “I would never move away from this system as it really solves the issue of temperature fluctuations and it’s easy to move pigs from above to below at seven weeks.
“From here they go into a push/pull designed baconer house, to about 110kg liveweight. We achieve a total herd feed conversion ratio ranging from 3.5 to 3.7kg feed/kg deadweight. We have ever-changing challenges and keep our eye on profit/cost ratios, rather than getting bogged down too much with biological detail.”

Get in touch
For more information, contact Mike Shattock on 07990 441699 or [email protected] Find out more about AHDB’s Strategic Farms and Gilt Watch at: pork.ahdb.org.uk/pig-production/

Mr Shattock said this principle could present a solution for pig farmers who need to invest and expand, but want to keep costs and their building’s footprint as small as possible.

“I think money needs to be invested in buildings, but it doesn’t necessarily mean a huge amount,” he said. “Perhaps, like we did, producers can look at how best they can adapt existing buildings; maybe a mix and match between ‘technology and good old fashioned practicality’. There’s perhaps no need to get too daunted by high technology. Maybe look at some practical automations or technologies that can save man hours and help time management on farm.”
Now back in the UK and in his ‘enlightening’ role with AHDB Pork, Mr Shattock is excited by how the levy body’s projects are going to tackle the challenges faced by the UK industry.

“Upcoming projects like Gilt Watch and the expansion of the Strategic Farms network are going to be really interesting when feedback starts to filter in and focus points like water quality are investigated,” he said. “It is sometimes the simplest things in production that can make a huge impact on profitability.”