“We also want to identify ways that units can advance their resource efficiency through improving the fertiliser value of slurry, as well as balancing the internal environment for pigs and staff.

“Danish producers are already facing extremely tight environmental regulations and therefore a number of units have pH reduction systems installed, in fact the total currently stands at about 75 pig farms across the country.

“Ahead of the main study tour to Denmark, myself and AHDB Pork chairman Meryl Ward visited the country, accompanied by producer Harry Heath and ARM buildings operations director Andrew Britton, to understand first-hand how these systems are applied. We also wanted to assess the practical and economic barriers that the systems may present for use in England.”

The group saw a pH reduction system and, despite looking complicated on first inspection, Mr Penlington says the way the system works is relatively simple.

“The pH reduction system adds sulphuric acid to separated slurry until the pH stabilises at 5.5,” he adds. “At this stage, the slurry is pumped back into the slurry pit located inside the pig house to a pit depth of 180mm. The slurry remains here for a day or so while the pigs dung into the pit.

“Once the pH has risen back to about 6.5, it’s let out through a slurry separator. A proportion is released into the slurry store while the remainder goes into the mixing tank for more acid to be added so that the process can begin again. 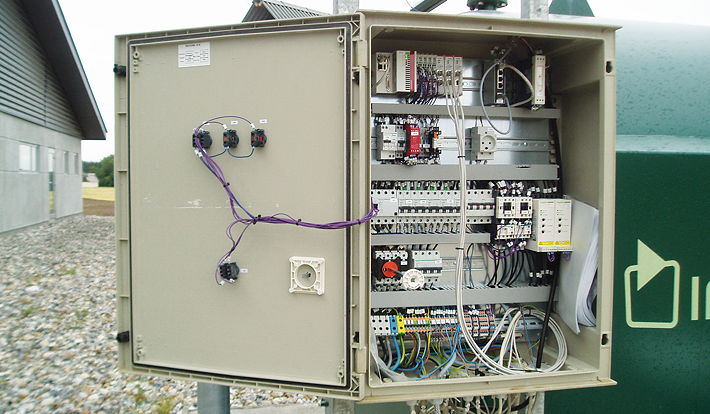 “What’s really encouraging is that the entire system is run by a computer and therefore requires no labour input once it’s all set up and working properly.”

Many benefits
Highlighting more advantages, Mr Penlington says the reduced level of ammonia released from the slurry means that the ammonia within the pig buildings is also depleted, which has health and productivity benefits for both livestock and the staff working within the building.

“Further to this, the number of flies in and around the unit was dramatically less than can be found on some English pig units,” he adds. “There were hardly any flies, and the overall pigs’ environment seemed fresher and cleaner, which brings with it improved biosecurity.”

He highlights that there was also a huge reduction in the amount of ammonia and odour being released from the slurry stores.

“The ammonia levels from one of the slurry stores was virtually 0%,” he says. “This means that Danish farmers with pH reduction systems installed don’t have to cover their stores and therefore are making substantial cost savings. 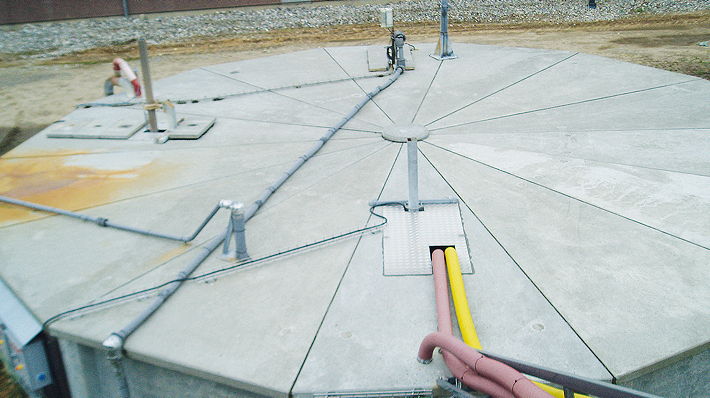 “What’s more, the available nitrogen in the slurry is increased as is the percentage of slurry available. The fact that you’re also adding sulphur to slurry means that you’re getting a sulphur benefit, and therefore less fertiliser is required for use on arable crops.”
Mr Penlington acknowledges the capital costs involved in implementing a pH reduction system on English units, but believes the benefits available will balance these costs long-term.

English producer looking to the future

“Our farm business comprises a 560-sow farrow-to-finish pig unit. We’re currently finishing about 14,500 bacon pigs a year and we also grow 500 acres of wheat, barley and oilseed rape,” he says. “For us, reducing our emissions on-farm is an important consideration as we look to grow the business during the coming years. For this reason, I jumped at the chance to go to Denmark with Nigel Penlington and the AHDB Pork team.”

Mr Heath adds that his own plans to expand could be hampered by the EU ammonia reduction targets.

“We’re IPPC permitted and are located close to a sensitive habitats,” he says, “therefore, if we want to expand we have to do it in such a way that results in a nil increase in ammonia emissions from our unit. This means ammonia emissions per pig place need to be reduced to ensure we continue to comply with our original emissions allowance.”

Mr Heath thinks pH slurry reduction systems look like an attractive option when compared to other available techniques, such as air scrubbing.

“EU recognised figures suggest that if we implement a slurry acidification system and install shallow pits, we can reduce ammonia by up to 73%,” he says. “What’s more, air scrubbing only provides benefits to the environment, whereas pH reduction systems provide benefits to the slurry for use in arable systems.

“We’re currently carrying out a financial appraisal to assess the viability of installing the system within the finishing unit as that’s where the majority of our ammonia emissions are attributed too.

“Early indications suggest that, as long as we’re growing oilseed rape, the capital costs of the system, as well as the operating costs, will be covered by the increased agronomic value of the slurry.

“The addition of sulphuric acid to the slurry increases ammonia retention, resulting in both an increase in nitrogen content and availability to the plant when applied to the land.”
However, Mr Heath says that he still has some research that he wants to undertake before committing to the system.

“Like many producers, we’ve got a real mixed bag of buildings on the unit,” he adds. “So it’s important that whatever system we go for it can be installed into our existing set-up.”

>> More information from the pre-study tour to Denmark can be found at: http://pork.ahdb.org.uk/news/photo-stories/