Denmark’s pig sector is keen to improve its welfare credentials and free farrowing is under the spotlight. While currently, 4,000 pens are in operation (there were 300 in 2007), the plan is for 10 per cent of the Danish breeding herd to be free farrowing by 2021.
Conversations with producers during the 2016 Herning Conference confirmed there’s mounting interest in a ‘less restrained’ approach. Indeed, the industry’s ‘Hearts for Pigs’ initiative, launched in October 2016, ranks 360-degree movement for lactating sows worthy of its triple heart rating and a weighty premium payment – providing systems are well-managed and satisfy the scheme’s criteria.

The processing sector also has confidence in high welfare pork and that the global market will continue to expand.
Many farmers here also believe higher welfare standards complement the Danish industry’s drive for more antibiotic-free (AB-free) production. A number of pig businesses are now operating ‘AB-free lines’ in which healthy pigs with AB-free potential are identified from birth and tracked throughout the production process to ensure medication-free status is retained until they are sold.

Producers think free-farrowed progeny could be managed in a similar way, with piglets born and raised ‘freely’ following a high welfare track, while conventionally (crate) produced progeny would continue to be sold into the mainstream market.

This concept means farms would only have to convert a proportion of farrowing accommodation. It would also be less daunting for an industry in which pre-weaning mortality continues to be a principal welfare issue. This might help farmers add value to their pigs and take advantage of high-welfare premiums, while moderating the potential risks of heightened piglet deaths. 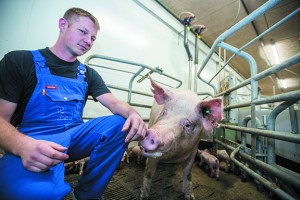 Unrestrained, under review
SEGES, Denmark’s Pig Research Centre, has been investigating loose housing at farrowing for more than a decade. It has produced a design specification that incorporates key features aimed at promoting piglet survival rates, while allowing the sow 360-degree movement and total interaction with her litter. Known as the SWAP 2 (Sow Welfare And Piglet Protection 2), the data gathered during its development has influenced the designs of other free farrowing systems.

Led by Dr Vivi Moustsen, SEGES chief scientist, an on-farm trial evaluating 10 free farrowing pens was set up in 2015. The joint project with weaner producer Jacob Anders is also part of a refurbishment and expansion programme that will take his herd from 700 to 1,000 sows.

The Anders family has pioneered free farrowing and Jacob’s father has had some input in the development of Vissing Agro’s Opti Farrow model. This system is also being installed in two other farrowing houses on the farm.

Mr Anders said: “The Vissing system embraces many of issues farmers face when managing farrowing sows in a loose housed situation. It works well and we now see that other systems have incorporated its qualities.”

Each system is being managed in accordance with manufacturers’ specifications and recommendations and will be assessed for: space allowances for sows and piglets; ease of access for sows and staff; provision and application of confinement; the position of creep areas and how it impacts on management; pen hygiene and cleanliness; the provision of feed, water and nesting/rooting material; the incidence of injuries (sows and piglets) and stockman safety.

This project will evaluate the functional aspects of each system. It will not measure litter performance – such as piglet mortality and weaning weights – as the objective is to provide potential users with practical and unbiased information. Findings will be made available at the end of 2017.
More details about the SEGES free farrowing project and a plan of the unit can be found at: http://www.pigresearchcentre.dk/Pig%20Production/Showroom.aspx 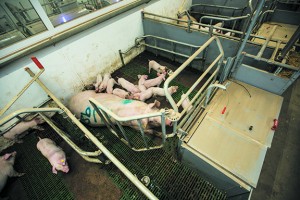 Free pigs, a personal perspective
Free farrowing has potential, but having worked with both indoor and outdoor herds, I believe this type of system requires diligent, dedicated management and confident, skilled stockmen – and more so with highly prolific genotypes.

My visit to the SEGES trial site reaffirmed these views, but also highlighted other issues the pig industry should be aware of.
Many of the agricultural/meat industry journalists accompanying me on the visit had limited experience of practical pig production and comments were mainly restricted to aesthetics, such as the ‘industrial’ appearance, ‘uncomfortable’ atmosphere and an unexpected amount of noise, rather than welfare benefits. They did, however, agree that sows and litters were in good condition and healthy.

Consumer perception is that freedom is free-range, rather than free movement, and convincing them otherwise could be quite a challenge

I agreed with these observations, but also felt the level of dust, both airborne and on the surfaces (see left), was significantly higher than I have seen in conventional ‘crated’ houses. This could be due to increased sow activity, which would create air turbulence and produce more particulate debris from skin sloughing, bedding/dung disturbance or rooting behaviour. Such actions are moderated when sows are confined and a ‘crate’ environment does seem more comfortable and hygienic.

I also felt quite vulnerable when wandering around the unit. The unrestricted sows were in close proximity to their visitors and, though each system had sow restraints to limit movement during farrowing and while routine tasks were performed, some pens had low walls and little else to protect stockmen.

I am yet to be convinced that free farrowing indoors is a welfare plus. Practical experience demonstrates that success relies on specialised management and there are still many unanswered questions about stockman safety, production hygiene, piglet health/survival and animal comfort and security.
Also, consumer perception is that freedom is free range, rather than free movement, and convincing them otherwise could be quite a challenge.