It’s innovative, with wide perspectives that extend way beyond its perimeter fencing – a fine example of collaborative mixed farming, and how top-quality products can be produced economically, in harmony with the environment.

A BQP partner for 30 years, LSB Pigs was set up during the early 1990s when a 350-sow unit was relocated from Oxfordshire to north Norfolk. Like the herd, farm manager Rob McGregor also travelled east and, together with owner Robert Battersby, they’ve grown the business into a two-site operation: the main 900-sow Coxford herd and another 550-sow unit a few miles away.

Both sites are rooted within a productive arable rotation growing combinable crops and sugar beet. Each herd has a two-year occupancy, secured through long-term tenancy agreements, and must work within the parameters of this estate’s well-established countryside stewardship schemes. There’s a firm commitment to improve biodiversity, protect soil health /water and improve ecology in this picturesque, highly productive area of East Anglia, and LSB is a vital part of this environmentally astute, forward-thinking farming strategy. 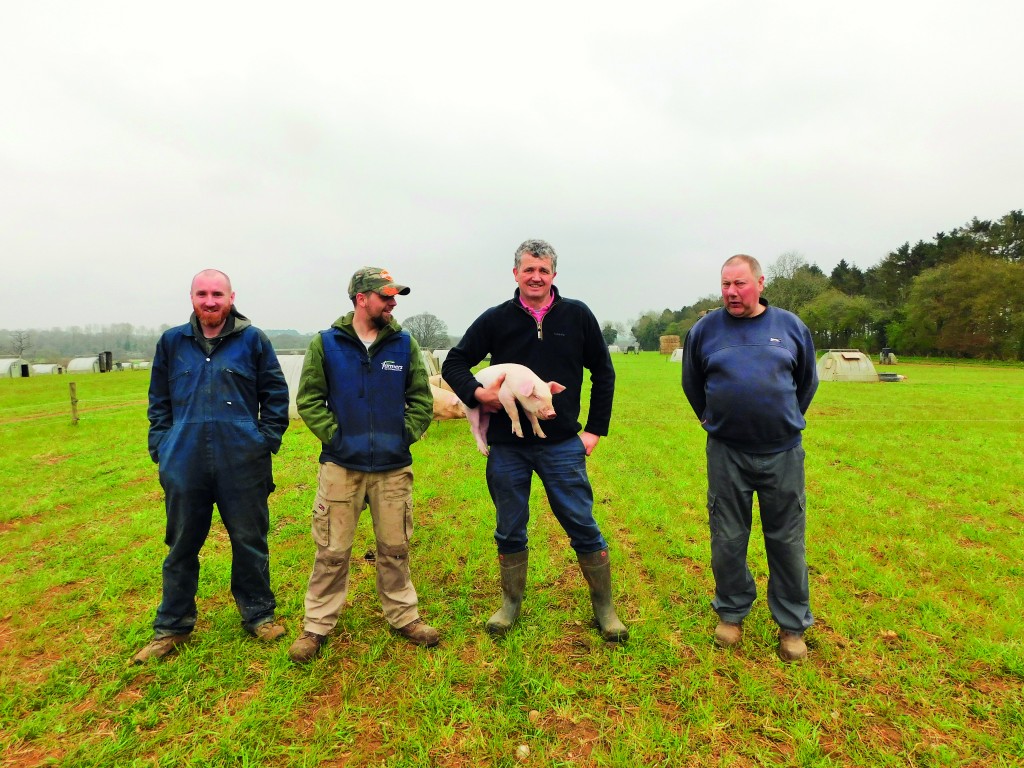 The pig sites are visibly ‘green’ and take advantage of natural topographies, such as woodland, shelter belts, hedge lines and sloped ground. During the past few years, unit layout has become more ‘widespread’, with site moves timed to ensure pigs move on to established grassland leys rather than stubble.

Stocking rate has become a key consideration and a ‘pasture management protocol’ has emerged from field trials, set up in 2017 to find out how maintaining grass cover could reduce soil erosion and nutrient leaching. The ongoing project, managed in conjunction with Kings Crops, the Norfolk Rivers Trust and Anglia Water with input from AHDB Pork, has demonstrated grass is a very valuable resource and how using specific seed mixtures and ‘grazing’ techniques improves soil structure, reduces water run-off and nutrient leaching and bolsters pig health and wellbeing.

It’s delivered a new perspective on ground cover, too, and proved how fodder-under-foot cuts down stress and provides motivational nourishment that LSB has found keeps sows mobile, fitter and in better shape to do their job – producing and rearing good quality piglets.

“John Adey, who scans our sows, says herd behaviour has changed since we’ve been on grass. The sows are calmer, less irritable to handle and we think that’s because they graze – all the time. They are still always keen to feed at the trough, but having constant access to grass tops up their daily ration so they’re satisfied. There’s little if any competition in the paddocks; having grass cover definitely takes a lot of stress out of the system,” Rob explained. 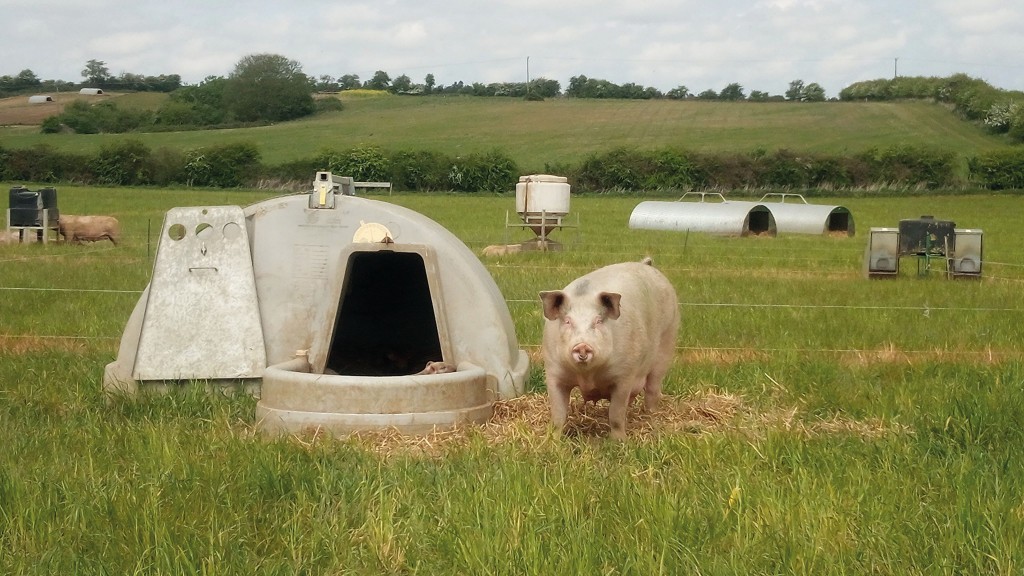 The original leys have been through two winters now, yet the fields (viewed, April 2022) have grass cover with minimal evidence of poaching. Rob explained that there has been fewer water gullies, far less mud and run off has been more controlled even during torrential storms.

The grass paddocks are also ‘more comfortable’ during the summer months as the sward is much cooler to lie on than bare soil.

“We move all our pigs onto grass now, and when we move off two years later, there’s still green cover left behind,” he said.

Maintaining a sward, particularly in the dry sow area, has increased sow activity. The dunging pattern is now more widespread – proof they’re more mobile – which helps stop the build-up of nitrates and minerals in one place. Rob said sows are also physically fitter throughout pregnancy and that’s helping reduce the length of time taken to farrow and speed up post-partum recovery.

Dry sows are managed using a three-paddock ‘flip-grazing’ system. Huts and water are positioned in a central paddock, and two additional paddocks are fenced on either side. Sows are stocked around 10 per acre, with paddocks grazed alternately, which allows grass to recover while still in production.

“We initially give sows the centre ground and once that’s grazed open access to one of the side paddocks. When that’s used, we close it off and open the paddock on the other side. Our sows are using two paddocks most of the time, one with the hut, and one grazing area. The grass recovers quite quickly and the sows follow it as it grows,” Rob said.

Jim Egan, technical adviser at Kings Crops, says flip-grazing really benefits sward retention. The pilot paddocks, now 14 months old, still have a decent cover crop and beneath the surface the soil structure is very good with visible worm activity. Mid-winter assessments (December 2021) reported no evidence of ponding, surface water or erosion on any of the paddocks, while the tracks and surrounding land displayed visible winter damage. 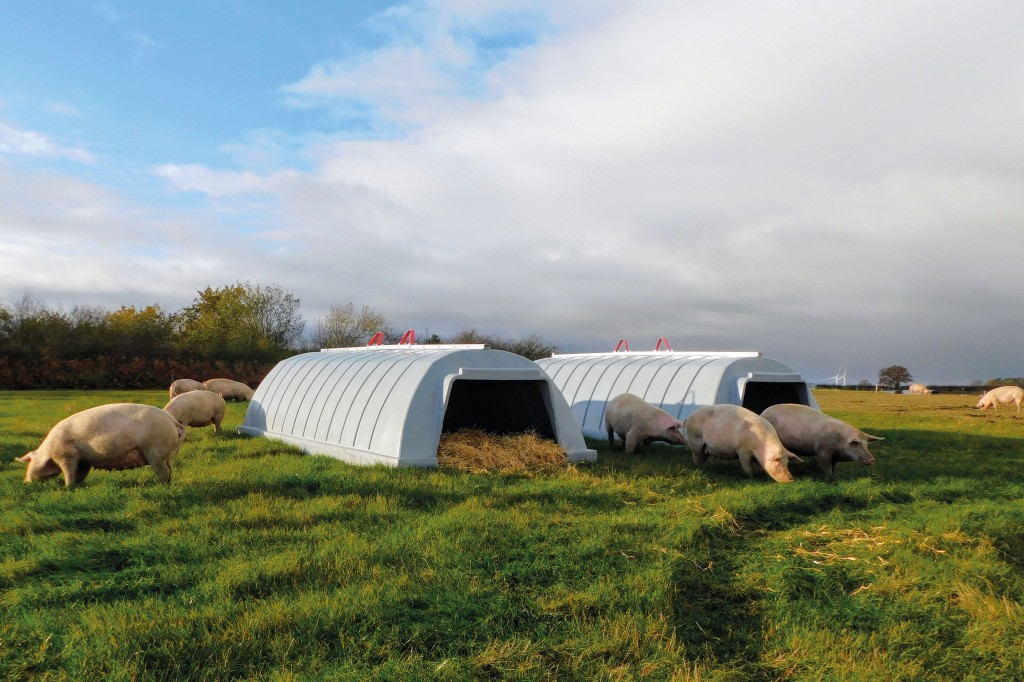 “We’ve still lots to learn here, but our observations suggest a creeping fescue/perennial ryegrass combination produces a palatable, but resilient sward with a more compact root structure and greater tillering – characteristics that will help reduce erosion, excessive leaching and water run-off, which is what we’re aiming for.”

Kings Crops is exploring other pig-appropriate grass species that could improve the durability of more traditional seed blends. It’s also investigating how herb/flower species might be included into the paddock mix to promote and support insect life and pollinators during grass establishment, before the pigs take up residence, and for areas designated as permanent cover.

LSB has always engaged with new concepts and ideas – they’re a pioneering team here, with a clear commitment to reduce inputs and push efficiency at every stage. The business has forged strong relationships with the allied trade and the Coxford herd is often a testbed for new innovations and prototype equipment.

The National Pig Award judges acknowledged how the trial work carried out on this farm benefits the wider industry and how LSB’s inventive team spirit helps build staff morale and encourage skills development.

“We like to be at the forefront of development and, like most farmers, are fairly good at finding practical solutions to problems. Improving production efficiency means we must push performance and make savings wherever we can.

“Our genetics are capable of very high productivity and we’re sure further improvements are possible. Our aim is to harness more of our herd’s production potential and our collaborations with allied industry is helping us find ways of doing this,” Rob said, confidently.

A new housing development is Contented’s twin-skinned dry sow hut, which Rob has helped to design. He’s been asking for a large, double-walled, plastic gestation hut for some time, certain that the benefits of insulation seen with the farrowing huts would be replicated with dry sows and weaners – and they have.

The new huts are 6m long and can house around 11 sows or 200 weaners. They are spacious, maintenance-free, easy to clean and like the farrowing huts are thermo-stable. They use less straw than conventional steel arks or tents, as there is no condensation, and their aerodynamic design makes them very secure, even in high winds. They are ideal accommodation for weaner lairage, too.

“We have a battery of these huts for each batch of piglets,” Rob said. “We pitch the huts in a convenient place, quite close to the farrowing paddocks, and we size the piglets into separate pens. Every hut has an outdoor run, constructed from moulded plastic hurdles, and a multi-nipple water tank, and the weaners will happily stay in this accommodation a few days, if need be. It’s a functional facility that’s saving us lots of time,” Rob explained.

Both LSB herds are part of the BQP/Pilgrim’s breeding programme and supply weaners to contract finishing farms. Many of its breeding units are now weaning piglets at 35 days, which is delivering increased weaning weights and improved piglet quality. 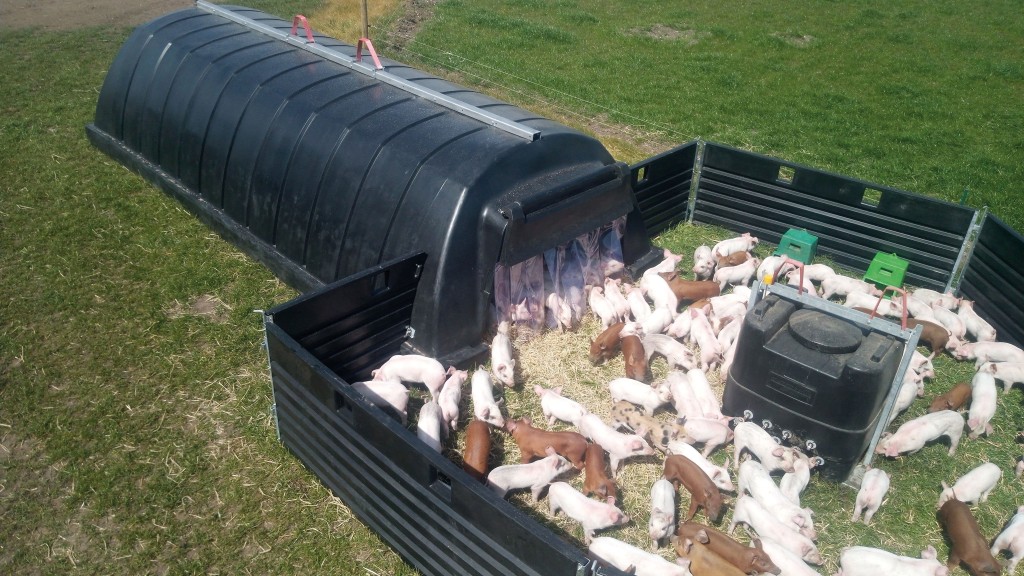 LSB has recently adopted a two-week batch, five-week wean production strategy – a switch that has meant a drop in sow numbers at the Coxford site. The herd is now 900 sows, but with consistently good performance, the potential to improve productivity and accrue savings by taking 100 sows out of production, Rob is confident the production economics will balance out.

“We required 85 sows per batch to make this all fit and reducing the herd to 900 sows meant we could make better use of resources. If we’d kept the herd at 1,000 sows, we’d have had to buy around 100 more farrowing huts, plus feeders and other equipment, and find more man hours. Having a slightly smaller herd means we’re in a better position to push for greater efficiency,” he said.

Although the unit is now weaning every fortnight, and more weekends are now occupied with farrowing, the staff prefer the smaller batch sizes. At weaning they pick up around 900 rather than 1,600 piglets – which is a bonus considering each one weighs between 8kg and 12kg.

“We were weaning about 150 litters in every batch, but now it’s between 70 and 80 every other week, a much less stressful experience and more manageable,” Rob added.

The business still weans 12 pigs a litter, from 14.8 born alive, with a farrowing rate to first service of 96%. Sows usually leave the herd at parity 6.

It’s difficult to gauge how the new five-week weaning system is performing, as only a few batches have completed a full cycle. However, Rob said piglets do appear more uniform coming off the field. Average sale weight is estimated at 10kg, which is 1kg heavier, so the extra week with the sow, plus creep feeding is benefiting weaner quality. Litters are fed daily from eight days before weaning (floor fed) and piglets are eating around 500g each in total (6kg per litter) during that final week.

LSB breeds its own replacements from an in-house herd of GP dams. Breeding gilts are pre-selected at weaning and reared in kennels for eight weeks. All are fed ad-lib with creep offered for the first three weeks, followed by a weaner-plus diet introduced in week four that is fed for about three weeks. A grower ration is introduced seven days before they are assessed again and moved outside to the gilt rearing radial.

They stay here to grow on for 21 weeks and continue to be fed the ad lib grower ration for six weeks. A dry sow ration, fed once a day in long troughs, is then introduced and growth and condition monitored. Target age at service is between 240-250 days, with an estimated bodyweight of 140-165kg. Their first farrowing is usually around 365 days of age. 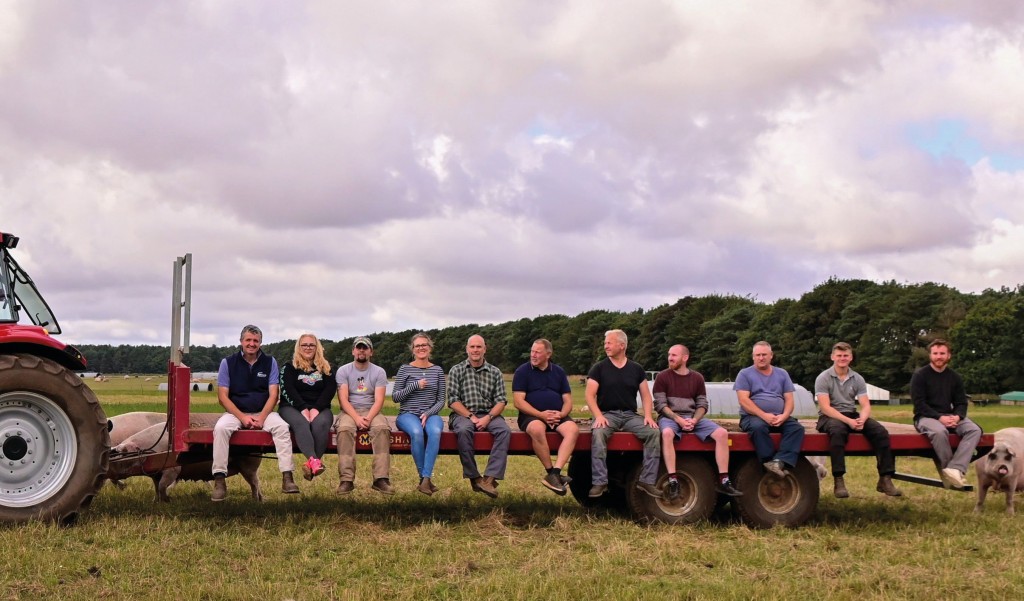