“Whilst the UK may be relatively blessed in terms of the magnitude of the heat challenge relative to those we compete against, as we enter the heart if summer, it is well worth revisiting some basics in relation to the effects of temperature on pig performance and considering what UK producers can and should do to mitigate it.” 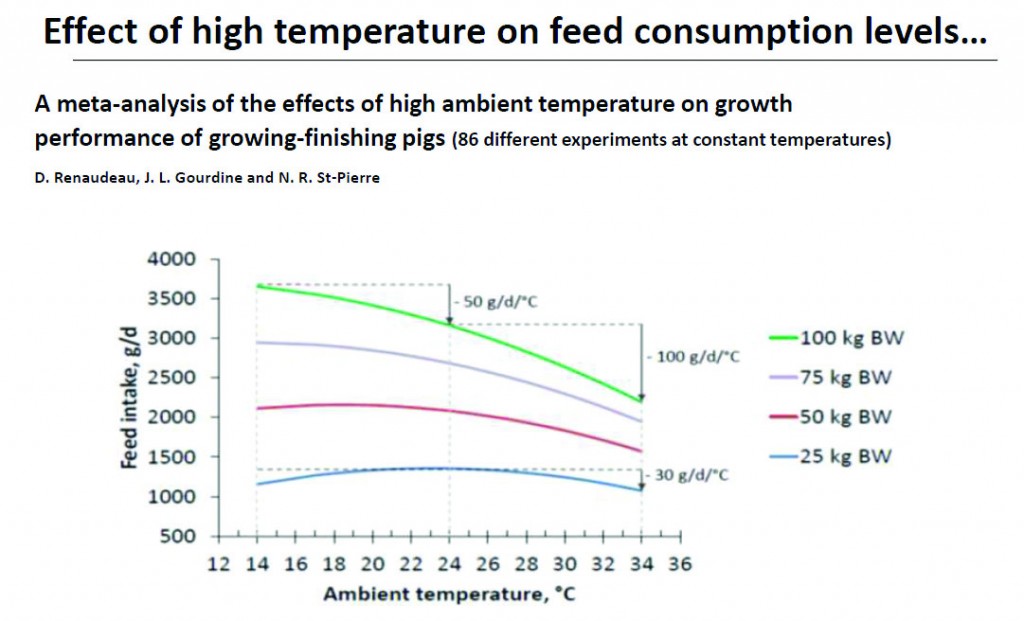 It is therefore imperative for pig farmers to maximise heat dissemination and minimise the animal’s need to reduce its own heat production by dropping feed intake or, worse still, allowing the excess heat to cause damage to the pig’s gastro-intestinal tract, Dr Boyd said..

Maximising heat dissipation is entirely under the farm’s control and how effectively this is achieved will be a significant variable from farm to farm.

“Undoubtedly, despite all efforts to maximise heat dissipation, at certain times of the year feed intakes of finishing pigs and lactating sows will suffer as a result of high temperatures,” Dr Boyd added.

“In this situation, the farm should work closely with their feed supplier or appointed nutrition advisor to appropriately adjust the rations used to both try to reduce heat output, to provide protection against the adverse effects of heat stress and to reflect the lower feed intakes seen.

“In countries where summer temperatures are predictably hot, nutritionists automatically adjust rations ahead of the heat, whereas in the UK, with currently less predictable hot weather and still significantly lower levels of problem due to excessive heat, it is still more common for people to react to change, rather than act ahead of the change.

‘Monitoring daily feed intakes and water consumption levels is becoming ever easier and cheaper, and whilst always important – a nutritionist simply cannot formulate properly without feed intake information – as our climate continues to warm, such an approach should be seen as an essential aid to try to minimise, as much as possible, the potential negative effects that hot weather can bring.”