With every cost on pig units under scrutiny at the moment, fallen stock disposal could be one that’s worth a closer look. Defra guidelines are currently fairly ambiguous, stating that dead livestock “must be collected, identified and transported from your farm as soon as is reasonably practical”. And, in the meantime, they must be stored in leak-proof containers with lids that prevent animals and birds accessing the carcases.

Clearly, it’s not ideal to have decomposing animal carcases on the farm for too long, so regular collections from the animal disposal companies are required, but what if the casualties could be cooled and kept for longer, reducing the frequency of collection and – depending on how your animal disposal costs are calculated – potentially saving money too.

That’s exactly what the Euratainer carcase coolers, made by Dutch manufacturer Coolworks, offer livestock producers, and it’s a system that’s been widely adopted throughout the Continent – especially in Holland where the system is mandatory. In fact, this year marks the 25th anniversary of the development of the system.

Coolworks’ owner, Ton Thomasse, came up with the idea for Dutch rendering company Rendac after being challenged by the organisation’s chief executive, who claimed it couldn’t be done. Ton, who had previously been building custom refrigeration projects, rose to the challenge and came up with a concept that saw 65 carcase coolers built and installed on farms in a project co-funded by Coolworks, the renderer and the pig farmers’ union.

This trial proved so successful that the system was recommended to livestock producers by the renderer, and Dutch law was soon changed to require all carcases of up to 40kg to be cooled prior to collection. Sales of the Euratainer have now topped 9,000 in The Netherlands, with half that number again having been sold to other EU states.

According to Ton Thomasse there are benefits to both the farmers and the renderer.

“For the farmer, there’s less smell and better hygiene, which leads to less infection pressure on the farm, and fewer visits are required by the renderer,” he says. “While the benefits to the renderer include the fact they get much higher quality material for rendering, which can improve the yields of important products from the carcases, and they can also optimise their logistics so that they can fill the trucks for optimum utilisation of their fleet.

“The farmers call when the bins in the carcase coolers are almost full, and the renderer can plan efficient collection routes. They no longer have to visit every farm every day.” 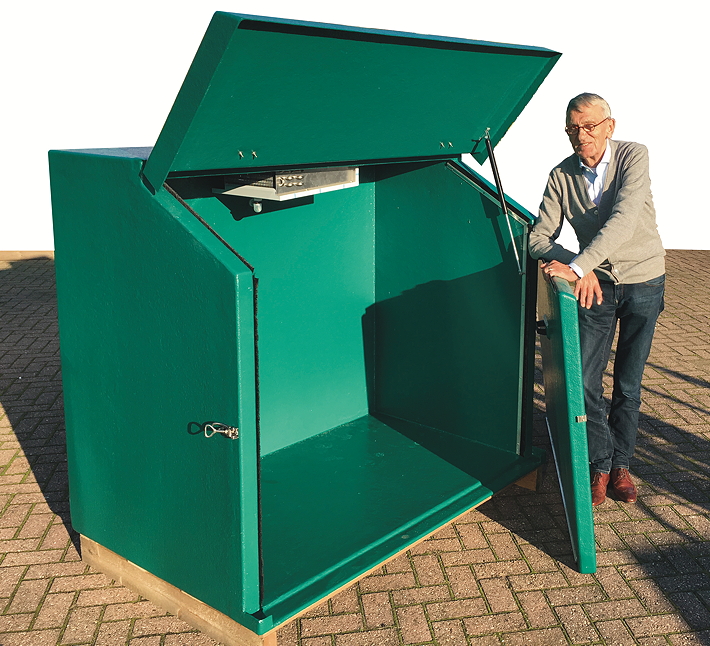 Simple construction
The Euratainer is constructed from polyester and has highly insulated sides to maximise its efficiency. It’s available in various sizes that are matched to hold either one, two, three, four or six of the standard 240-litre wheelie bins that are used by many animal disposal firms both in Britain and on the Continent. These same models can also hold larger plastic or metal bins that are also commonly employed by deadstock collectors for larger pig units.

The key to the Euratainer, however, is its refrigeration unit that features a stainless steel evaporator for a reliable working life. This has been especially developed for Coolworks and uses environmentally friendly propane as its refrigerant. The design also means that if there’s ever a problem with the whole refrigeration unit, it can be easily swapped with a replacement, minimising downtime and removing the need to bring refrigeration engineers onto the farm.

Another feature of the refrigeration unit is that it drains moisture collected from its condenser to the outside of the carcase cooler, which has a drying effect on the contents. Domestic fridges are built so that this doesn’t happen as it would affect the quality of the food, but for the Euratainer this is a positive benefit as removing moisture from the air and drying the carcases can significantly reduce their weight for transport.

In fact, trials by Danish renderer Dakar suggest that this drying effect can reduce the weight of the carcases by as much as 15 to 20% (50% of a pig’s bodyweight at slaughter is water held in its cells). In practical terms, that means less weight for the animal disposal company to transport – and for the farmer to pay for – and less water for the renderer to boil off during processing.

Positive trials
Preliminary results from AHDB trials on carcase coolers in England have been positive, with reduced odour and running costs of about 80p/day during the summer months. They’ve also been well received by farm and animal disposal staff, who’ve found they create a much more pleasant working environment.

The primary aim of the AHDB trial is to look at the potential for carcase cooling to result in better on-farm biosecurity, but the levy body also recognises that there’s potential for a situation where better quality carcases result in a higher yield of marketable products from the rendered material, which could even lead to a reduction in collection costs.

Bacterial growth slows in the cold

The concept behind cooling carcases is proven in our fridges at home, day-in/day-out, but the scientific basis for the process is displayed in the curve of Ratkowsky (see below), which demonstrates the effect of temperature on bacterial growth.

As living organisms ourselves, we know that everything works best at our normal body temperature of about 38C. That’s because that’s where the microbes that allow us to digest food operate most efficiently.

At higher and – more importantly in this case – lower temperatures, however, the bacteria don’t work so well, and at about 5C to 6C they shut down altogether.

It’s this action that allows the carcase coolers to slow the decomposition process so that the deadstock can be kept on farm for longer without becoming a biohazard. 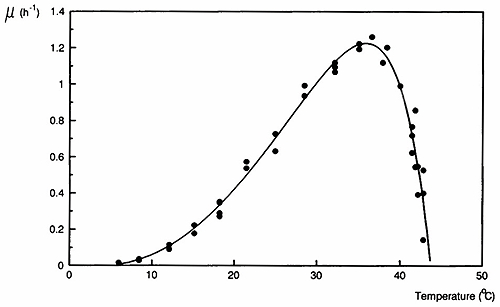 The Animal and Plant Health Agency (APHA) requires carcase-cooling equipment to be inspected for suitability of purpose in a similar way to which it currently inspects on-farm incinerators.

This is because both types of equipment mean that carcases are not being collected from the farm “as soon as is reasonably practical”, so the agency wants to ensure that where cooling is being used, it is working and the carcases are being stored in a suitable manner.

APHA also requires the carcase coolers to be sited on hard standing that can be washed down should any spillage occur.

Following an initial inspection, the facilities will be subject to further periodical inspections. As the agency is moving to a risk-based assessment model, however, these inspections will not be at fixed intervals, but will be tailored to individual units.