The program has been introduced in the UK following the launch of Ceva’s new Hyogen vaccine. This combines two new vaccine components: BA-2940-99, a proprietary M hyo strain, and Imuvant, a unique adjuvant containing non-toxic lipopolysaccharides from J5 Escherichia coli. A single injection from 21 days of age will provide 26 weeks of immunity protection against M hyo.

Another new vaccine, Coglapix, is also now available from Ceva that provides protection against Ap, and together, the two vaccine treatments and the CLP evaluation service make up Ceva’s comprehensive lung health offering to the pig sector.

“What we’re doing is more than just introducing new vaccines,” Ceva UK swine manager Paul Penny says. “We’re also adding lung monitoring support to pig producers in the field. And there’s also a Ceva Respinomics app being developed that will do the calculations to show the financial benefits of adopting a vaccination programme.”

At the centre of CLP is a new app developed by the company for tablet computers for vets to accurately score pig lungs in the abattoir. It allows pneumonia and pleurisy to be evaluated in a qualitative and quantitative manner.
Pneumonia is scored based on the Madec method, which has been modified taking into account the contribution of each lobe to the overall capacity of the lungs. The quantity of scarring is also included. 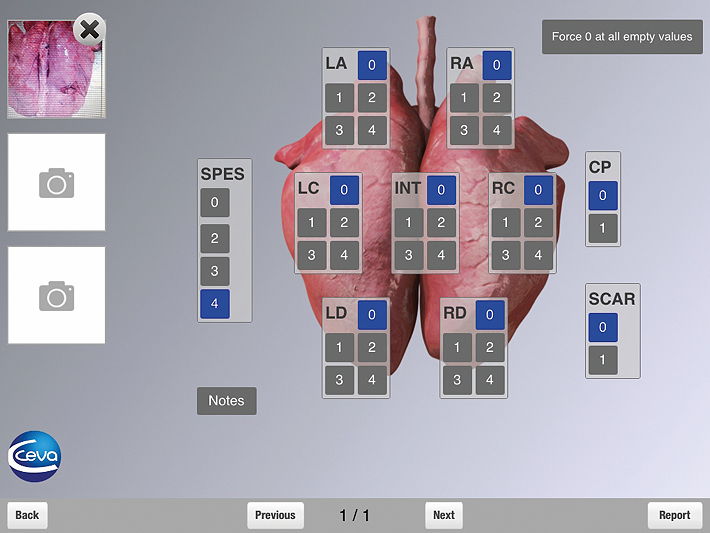 The data input screen on the newly introduced CLP app

Processing scores
Through statistical processing of the recorded data, the CLP enables not only measurement of the incidence of the injury caused by lung disease, but also identification of the distribution by classes within the sample. It even displays the data in easily legible graphic displays, and is capable of providing information about the frequency, severity and suspected origin of pathological changes most likely due to M hyo and Ap. 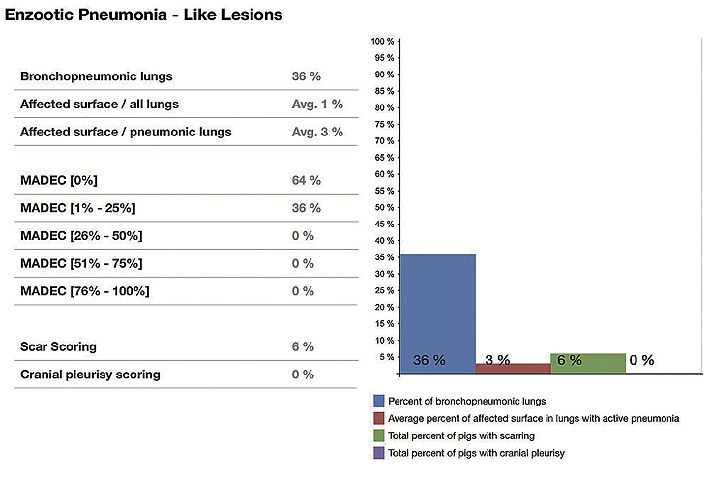 Cranial pleurisy is scored based on its presence or absence. The percentage of cranial pleurisy in the evaluated group indicates the probability of the previous infection of pathogens affecting the cranial part of the lungs, especially M hyo. And finally the APPI provides information regarding the prevalence and seriousness of any dorsocaudal pleurisy, which is highly indicative of prior pleuropneumonia due to Ap.

Correct diagnosis
The CLP monitoring and scoring methodology is designed to assist in identifying the correct diagnosis of respiratory disease through the evaluation of lungs at slaughter. It enables the discovery of even subclinical infections that weren’t noted during the growing period.

The calculated values allow the estimation of both the incidence and the severity of enzootic pneumonia and pleuropneumonia, and it can also be used to evaluate the efficacy of the control measures against M hyo and Ap when used both prior to and after their implementation.

And when used routinely, it can aid in the recognition of the dynamics of those infections in a defined period or to highlight seasonal differences.

“It allows veterinary practices that recommend the use of our vaccines to look in detail at the lungs of their customers’ pigs before and after implementing the vaccine protocol to see what’s happening,” he adds. “It’s a value added service we offer to pig producers.”

Eduardo Velazquez of the Garth Pig Practice has already used the Ceva Lung Program app in the abattoir to evaluate lungs and is confident it has a place in managing pig health on UK farms.

“It’s a novel approach to lung scoring, and a useful new diagnostic tool,” he says. “It’s something else we can add to the lung health tools we already have.”