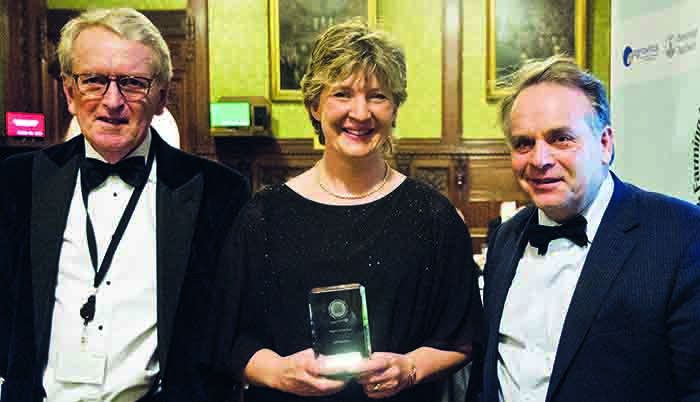 Unusually, the business also has its own abattoirs and processing facilities, located in Turriff, in Aberdeenshire; Spalding, in Lincolnshire and Colne, in Lancashire, through a 100%-owned subsidiary, Woodheads. This means all of its fresh beef, pork and lamb is British. Its fresh poultry, which it buys in from other suppliers, is also entirely British.

It also manufactures most of its own fresh food in 18 manufacturing sites and 495 stores, including bakery, seafood, meat, fruit & veg, flowers and chilled processed produce.

Sophie Throup, Morrisons agriculture manager, said: “From the retail buyers and all the way through, we’re thinking about carcase balance and what we can do to get the whole value out of that animal we can buy. We are buying from farmers every day and so they are going to tell us directly if we are working properly in partnership with them. But I think it’s great.

“I certainly enjoy working for a company like this because you genuinely feel part of a connected supply chain. It’s not just lip service. We all have to work together.”

“In addition to that, we have an external sales team who will sell abroad, particularly the fifth quarter. So, we have all of those skills within our business to get the best value out of the carcase for farmers,” Mrs Throup added.

“We do trotters and skin and all sorts of things on the butchers’ counter as well as the core products you would expect.

“We are one of the biggest processors of British pork, with the recent expansion of our Colne site enabling us to process more UK pigs than ever before. All of our fresh pork is sourced from UK farms, which have some of the highest standards in Europe and the world.

“As well as Red Tractor, we have introduced additional measures for the full range of pigs coming into our fresh pork supply, including increased monitoring and checking of stock, training of staff and regular body condition scoring of the pigs at key times of life.”

Morrisons is keen to promote the credentials of its supply chain to its customers, but it balances this with a clear understanding of the needs of farmers.

This attitude feeds into the retailer’s approach to antimicrobials, for example. Last year, Morrisons made the decision not to sell fresh pork that had been treated with antibiotics deemed to be critically important for human health.

“We recognise that antibiotics is very much a ‘one health’ issue, covering human health, the environment and livestock health. “We feel we have a part of play and it is one where we are with working together with industry,” Mrs Throup said.

Morrisons’s producers have been told that if they need to use an antimicrobial categorised as critically important by the European Medicines Agency (EMA) they must flag it up before slaughter.

“We said to producers that if the only resort for pig health and welfare is that a critically important antibiotic needs to be used, then it needs to be used, but please flag it up to us and we won’t put it in our fresh pork range,” she added.

“We are certainly not going to do anything to challenge pig health and welfare as that’s ultimately the most important thing.”

Although Morrisons has a 100% British fresh meat sourcing policy, it does import some bacon. Mrs Throup said this was necessary to meet demand, but the retailer is trying to promote British in store where possible.

“We are net buyers of back bacon in the UK,” she added. “That is the way our customer base is built. Our customers eat a lot of bacon and there aren’t enough British pigs to go round the whole balanced carcase.

“We do import some bacon and gammon. However, we have made a conscious effort to try and promote British bacon and we have a big British sourcing policy. Our Best bacon is from our Hampshire range, which is British.

“We’ve got that on a ‘two for £4’ offer at the moment, the same as our Best sausages, which are also British. So, we are trying to promote British and we do offer a British back bacon within our standard range as well.

“Everything else, all our fresh pork, is British.”

As part of its efforts to highlight its British sourcing credentials to consumers, Morrisons takes a firm stance against the use of ‘fake farm’ labels.

“We have a very strong policy, we do not do fake farms,” Mrs Throup said. “We are quite vociferous about it because we need consumers to know and trust what we’re doing. So, every farmer featured in our stores is a real farmer that we buy from – we don’t have any posed farmers or models. We buy directly from 3,500 farmers and they are real businesses. We don’t believe in misleading our customers, so they are all real and completely genuine.”

In 2017, Morrisons launched a new range of pork under it’s ‘The Best’ own-label called Hampshire Pork. The project went right back to selecting genetics to guarantee a tasty, easy-to-eat product.

The firm worked with Tendergen Genetics and 21 farmers and ended up choosing Hampshire pork genetics for the final product, which were put through to Morrisons producers through a boar line.

“The launch was part of a wider eating quality programme led by Morrisons in partnership with Yorkshire Farmers and JSR to improve the eating quality and reduce the variation of our pork,” said Mrs Throup.

“It had had a bit of bad press and consumers were turning away from it, so we wanted a meat that was consistently good to eat and tasted good as well. It’s been on the shelves about 18 months now, and it’s doing very well, so we’re pleased with it.”

The Hampshire Pork range comes from indoor pigs. This might be seen as a surprising choice for a top-tier supermarket range, particularly at a time when other retailers are increasingly pushing outdoor- bred pork.

But Mrs Throup stressed that Morrisons is keen to support farmers who prioritise stockmanship and echoes organisations such as the NPA and NFU in arguing that production system is less important than how well those systems are managed, whether they are outdoor or indoor.

“At the end of the day, production systems are one thing, but it’s the welfare and health outcomes that are another. Hampshire Pork is grown indoors in systems that are really well managed by farmers who are very passionate about what they do. So, it’s about making sure those pigs’ health and welfare outcomes are at a great standard as much as anything else,” she said.

“I’m really quite passionate about the fact that stockmanship holds the key to everything and we are very committed to the fact that it drives the key health and welfare outcomes, and ultimately the health of the business.”

Morrisons has, quite rightly, been praised for its relationships with its farmers, but the difficulties of managing a regular supply of pigs has been highlighted recently.

Pig World has learned that some pigs contracted to Woodheads were ‘rolled’ onto future dates in the run-up to Christmas and into the New Year – a situation certainly not unique to Woodheads.

Questioned about this, a Morrisons spokeswoman said: “Morrisons deals directly with 140 pig farmers across the UK and have contract commitments in place with all farmers. We work closely with all farms to manage supply of finished pigs over the course of the year.”