Unfortunately, the strong pound (or weak euro) is also continuing to hit pig producers’ returns with imports remaining highly competitive and exports worth less, with the euro trading lower at about 71.37p on Friday afternoon compared with 72.2p a week ago.

Despite currency movements, cull sow values have thankfully remained the same, although at pitifully low levels, with most trading between 60 to 64p/kg according to load size and spec, and Putin’s EU import ban seems to be continuing to wreak havoc as far as pigmeat values are concerned, not to mention the wider effect on other EU staple food exports.

Unfortunately, weaner prices are continuing to reflect falling finished pig returns, although hopefully by the time 7kg piglets come onto the market as finishers in 16 to 18 weeks’ time, prices might have improved (?) with the latest AHDB 30kg ex-farm weaner average quoted at £43.25 and 7kgs at £32.85.

Because of high UK progeny pig numbers, it’s difficult to find any space in the system for spot loads of weaners, but I have some available for any sellers who may be looking!

Cereal prices have ended the week at generally similar levels to the start, with November wheat quoted on the LIFFE futures exchange at £114.95/t and March 2106 at £120.35/t. According to analysts, a combination of ample supplies and low prices may help to keep cereal values at recent levels, although as we all know to our cost, outside events, as well as speculators, can soon kick the market in the wrong direction as far as pig producers are concerned. 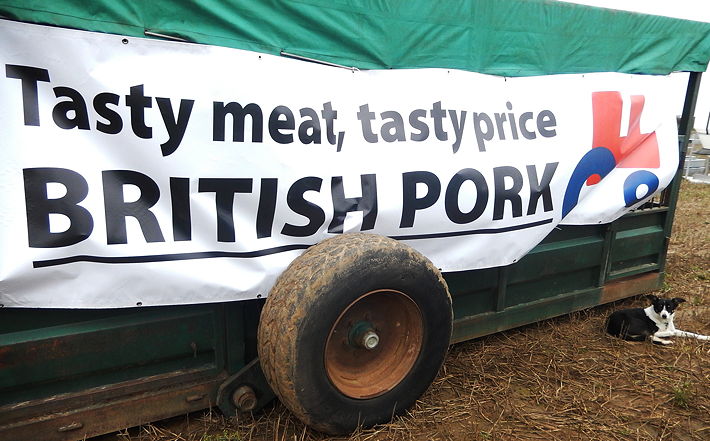 And finally, for those who enjoy mud, my last mega outdoor pig equipment sale of the season takes place tomorrow at Coney Weston near Bury St Edmunds, where more than 1,000 lots of good-quality outdoor pig equipment comes under the hammer (or umbrella). And as you’ll see from the photograph above, the banner and the collie are already all fired up and ready for action!

Based in Suffolk, Peter Crichton provides a wide range of valuation, auction and livestock marketing services, as well as supplying the UK pig industry with a wide range of consultancy services covering tenancy, contract advice, pig equipment and herd valuations as well as dispute resolution. For more information visit: www.petercrichton.co.uk