I think we often forget just how little time we have to capture people’s attention, as we all suffer from information overload.

On average, I’m told, people check their email 30 times per hour in work (some while in meetings or even talking to somebody) and that’s without the constant interruptions of texts and phones.

So we all now have this difficult task of getting messages to the reader/watcher/worker in a much shorter time frame than previously. I learnt that all our messages need to be short, clear and communicated more passionately. They should also be accompanied by pictures or videos to penetrate the cluttered brains of people who are losing the ability to focus. Not easy!
What was involved in creating a two-minute story on the Six O’Clock News (great TV, even though I say so myself) and a primetime radio interview? Probably a total of 12 man-days!

Simon Watchorn, in particular, did a grand job of explaining how the pig industry works and how his farm operates – it was obvious from his confident style that he is used to communicating to visiting tourists on his farm. The pigs were also on top form and put on a great performance, about which Carl (the camera man) said: “Well, if that doesn’t make it on to the news, then I don’t know what will!”

After the news story had broken and the radio broadcasts had been made, we were eagerly watching the news that day, hoping the news agenda didn’t conspire against us so we wouldn’t make the cut. What I didn’t realise was just how competitive it is for a correspondent to get their story used! The minute your story has broken, you can only hope that it gets taken up, because, sadly, all is forgotten tomorrow.

Was the effort worth it? Yes, as we had an estimated audience reach of 25 million people.
What I’ve learnt is the importance of considering what are the messages (just three key words) you are communicating, and how they are perceived by the layperson.

It’s becoming increasingly important to get our main messages across and we now have a tougher time doing so. So I challenge you to think about your key words and how you can share them at every opportunity.
Mine are: ‘responsible industry, exciting and innovative’.

What will yours be? 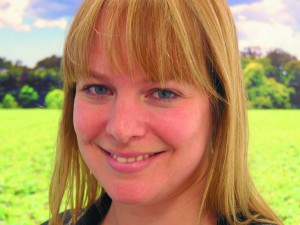 Charlotte Evans joined AHDB Pork in 2009 after working on a 1,000-sow indoor unit and is now technical senior manager.