He explained how the Government’s antibiotic strategy aimed to address the risk of transmission of resistance from animals to humans and to preserve the veterinary antibiotics for the future. “It is only really with good stewardship that we will prevent more untreatable conditions,” he said.

Mr Green outlined the work being done through the Responsible Use of Medicines in Agriculture (RUMA) Targets Task Force in setting sector specific targets and said the poultry sector has been at the ‘vanguard of good stewardship’ for many years before praising the pig sector’s recent progress.

“The pig sector has also been very active,” he said. “The electronic medicine book, which the latest figures show now has 70% coverage of the national herd, was launched last year and was followed up by the (NPA’s) antibiotic stewardship strategy. Data from the pig sector show there have been dramatic falls in the use of Colistin and quite sharp falls in the use of antibiotics in feed for young pigs.”

He stressed, however, that more needs to be done across the livestock sectors and urged farmers and vets to ‘talk to each other about antibiotic use, farm health planning, biosecurity and disease prevention’.

He added that the 50mg/kg livestock industry-wide target for antibiotic usage, which the industry is on course to meet, was ‘just the start’, ahead of sector-wide targets to be announced in October. “My own view is that we have quite a way to go,” he said. 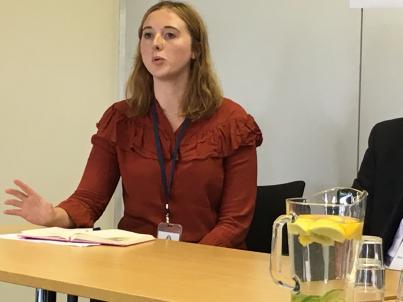 NPA senior policy advisor Georgina Crayford (left) told the audience of farmers and animal health experts gathered at the event in Stoneleigh, Warwickshire, that the pig industry was ‘really proud’ of the ‘brilliant progress’ made over the past year or so in rising to the antibiotic challenge.

On top of the 70% coverage under eMB-Pigs, the 70% reductions in Colistin use and the halving of antibiotics in piglet feed, Dr Crayford also highlighted Pig Veterinary Society prescribing principles ensuring that Critically Important Antibiotics are used only as a drug of last resort in pigs.

Overall pig industry usage is believed to have fallen significantly in 2016 and the first half of 2017. But she acknowledged that the pig industry, the highest using sector despite representing only 10% of livestock biomass, faced some ‘inherent challenges’ in addressing its antibiotic usage.

“Further progress is achievable but it might not be as quick as some people were hoping,” she said.

She highlighted the need to stimulate greater awareness among farmers about the need to act to protect the use of antibiotics for their own pigs’ health and public health as well’.

She added: “There has also been a distinct lack of investment in the pig industry, which means farmers have just not been able to modernise their systems and move away from habitual prophylactic use of antibiotics. But those challenging discussions between farmers and vets are now starting to happen.”

“But we will need time – reductions are not going to happen overnight. We need this attitudinal shift among producers and we need support from retailers and processors. They must not make antibiotics a competitive issue.” 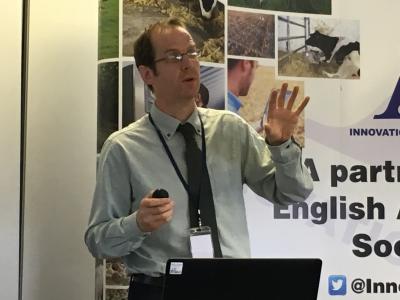 Dr Crayford also refuted the suggestion from Coilin Nunan (left), of the Alliance to Save our Antibiotics, of a link between intensive farming systems and higher antibiotic usage.

Calling for ‘urgent action to reduce farm antibiotic use’, including a ban on preventative treatments and limits on CIAs, he said: “Antibiotic use can be significantly reduced without changing farming methods, but even lower levels can be achieved in organic and other extensive farming systems.”

But Dr Crayford said equating production systems with antibiotic use was ‘far too simplistic’. “There is much wider context. Pig producers are running a business and they need to produce at a price point the consumer is willing to pay for.”

She also pointed out that high-tech, hygienic modern pig buildings can support reductions in antibiotic usage, as has been the case in Denmark and Holland, while high welfare straw system can sometimes be harder to keep free of infections.