While almost all abattoirs are now said to be running to some extent, capacity is still reduced due to staff sickness and distancing measures and it will likely take several months for the supply chain to get back to normal operations, Ms Wilkins said.

“The US industry is poorly equipped to cope with any reduction in slaughter capacity. Weekly slaughter is typically close to maximum capacity throughout the year, meaning it is difficult to make compensatory adjustments if something goes wrong,” she added. 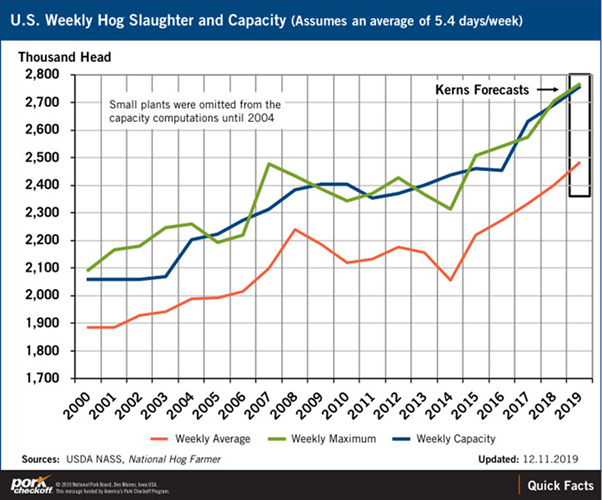 Based on an average of the five top weeks’ kill in 2019, suggests maximum UK throughput is about 202,000 head per week, including sows, Ms Wilkins said.

At this time of year, however, slaughter is typically we below the maximum. From May-July 2019, GB weekly slaughter averaged 172,000 head. This year, AHDB expects an extra 2% more pigs to be available, which would give an average of 175,000 head, requiring the kill to average 87% of capacity during the early summer.

Theoretically, this would leave about 27,000 head of spare capacity available each week during the next couple of months, providing for compensatory adjustments to be made if normal slaughter is disrupted at one or more plants, Ms Wilkins added. 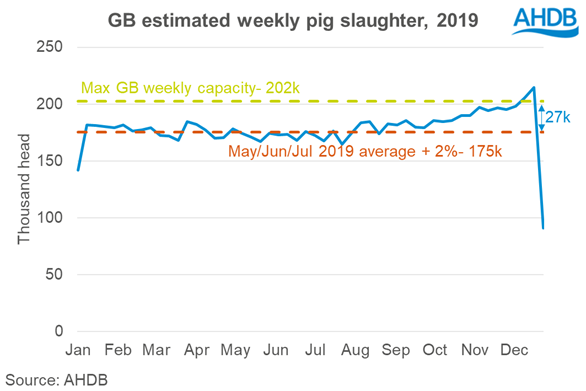 “Of course, if an abattoir closes, the spare capacity in the system will be lower than this, as the closed abattoir’s contribution will be lost. Logistical constraints around transport and staffing availability may also mean that this theoretical spare capacity cannot be achieved in reality,” she said.

The vast majority of pigs in England are slaughtered in large abattoirs, with an annual throughput of over 500,000 head, with the picture likely to similar in Scotland.

The eight largest abattoirs have an average annual throughput of 921,000 head, equating to a weekly average of about 18,000 head. Estimated spare capacity at this time of year is about 27,000 head.

Size profile of all abattoirs slaughtering pigs in England, 2019

While there maybe plants that exceed this capacity, it is likely that in most cases, if one large abattoir closes, there should be enough spare capacity in the system elsewhere to compensate, Ms Wilkins said.

“However, the closure of two large abattoirs is likely to present problems. This would displace about 36,000 head of pigs, which would be well above the spare capacity elsewhere. The significance of this problem would depend on how long the plants were offline or operating at reduced throughput,” she said.

Current social-distancing and self-isolation guidelines also mean it may be more difficult to achieve the additional capacity potentially available than suggested here, she added.

“It seems that while the pork supply chain has remained robust so far, there are vulnerabilities in the system,” she concluded.

“The concentration of pig slaughter means only a couple of large abattoirs would need to close for pigs to start backing up on farms.”