But these guarantees are now looking flimsier by the day as Trade Secretary Liam Fox this week discusses a possible future US-UK trade deal with US officials in Washington. With backing from some other prominent Cabinet Ministers, although not Defra Secretary Michael Gove, he is reportedly in favour of removing the current EU barrier to imports of US chicken rinsed in chlorine.

Mr Fox has sought to play down the controversy, describing it as ‘a detail of the very end stage of one sector’ of future talks but it lies at heart of farming industry concerns about post-Brexit trade deals.

The US is keen to include agriculture as part of any future trade deal but for that to happen, the UK is likely to have to lower its standards in a whole range areas, including chlorine-rinsed chicken. For the UK pig sector, differences in standards in the US include the use of feed additive ractopamine, the use of sow stalls, although these are being phased out by some companies, and different rules on antibiotic use.

While its focus was very much on animal welfare rather than public health issues, today’s House of Lords report is timely. Lord Teverson, the committee chairman, said: “The UK has some of the highest farm animal welfare standards in the world and UK producers are rightly proud of those. We see no reason why Brexit should diminish those, as long as the Government is aware of the challenges ahead and acts accordingly.

“We heard evidence of undeniable concern that opening up the UK market to free global trade poses a number of issues. As we said in our last report, Brexit: agriculture, the Government may find it hard to reconcile its free trade ambitions with its commendable desire for preserving high farm animal welfare standards.

“Whilst Brexit provides the UK with the unique opportunity to review and potentially improve farm animal welfare standards, the Government will need to consider the effect of increasing standards on the competitiveness of UK producers as well the future trading relationship with the EU”.

The report reflected the concerns about lower standard imports voiced by various industry and animal welfare representatives gave evidence to the inquiry. 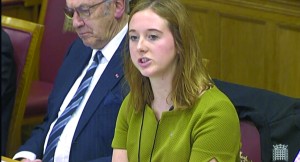 These included National Pig Association senior policy advisor Georgina Crayford (pictured during the inquiry), who is quoted in the report as warning that the pig industry’s ‘big concern is the talk from some government members that we need to pursue a cheap food policy’.

She said: “We need to be cautious about raising standards so high that we end up exporting production abroad. We need to make sure that we have a sensible policy so that farm businesses can be profitable and sustainable.”

The NPA ‘wants a level playing field, but we want to level up rather than down’, she added.

The Committee found that consumers are not always aware of the difference between production systems or willing to pay a higher price for premium welfare products, which it warned could ‘exacerbate the challenge to UK farmers’ competitiveness’  from an increase in cheaper, lower standard imports.

And it stressed that while the repatriation of farm animal welfare policy presents opportunities to ‘review and improve farm animal welfare and standards’, the Government ‘will also need to consider the effect of increasing standards on the competitiveness of UK producers and the future trading relationship with the EU’.

The report also found ‘an overwhelming reliance on non-UK EU citizens to fill crucial official veterinary positions in the UK, whilst the agricultural sector employs significant numbers of temporary and permanent farm workers’.

It called on the Government to ensure that the industry is able to retain or recruit qualified staff to fill these roles post-Brexit.