By the time you read this, there will be fewer than 150 days for those companies to have met the target. Most, if not all of them, will fall considerably short.

There will be no legal charges to face (this was a self-imposed target). However, this failure has consequences.

In the decade since the commitment was made, 50 million hectares of forest (an area the size of Spain) will have likely been destroyed to grow these commodities, according to Greenpeace.

This not only has devastating ecological impacts but also drives climate change – deforestation is responsible for 12% of the world’s greenhouse gas emissions, with most driven by agricultural commodities. For those trading in them, business has never been better – the area planted to soya in Brazil alone has increased 45% since 2010, fuelled by demand for livestock feed.

Supply from Brazil is currently world news thanks to a worrying spike in the number of fires to clear land for crops and cattle. Nations reliant on the country’s output, including soya for animal feed, have cried foul but offered little in the way of solutions.

More concerning still, perhaps, is that peak demand for soya is still some way off.  The UN’s Food and Agriculture Organisation suggests production could reach 515m tonnes by 2050, almost double 2012 levels, with most of it fed to animals.

Soya is the most important protein source in pig diets, according to ForFarmers’ corporate affairs director Nick Major, who is also president of Fefac, the European Feed Manufacturers’ Federation.

Its use in pig diets has fallen in the past 10 to 15 years to around 8%, thanks to the introduction of more rapeseed and sunflower oil, as well as distillers’ grains and synthetic amino acids. However, it remains an important ingredient thanks to a great nutrient profile – high protein content (more than 40%) and balanced amino acid composition – and year-round availability in predictable quantities.

The UK imports vast quantities of soya for animal feed. 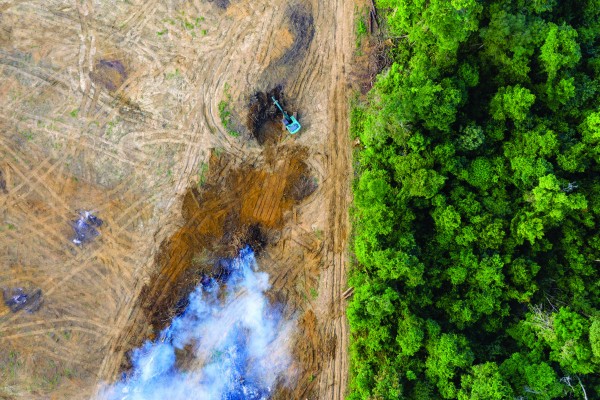 However, very little of it is responsibly sourced – and even less is ‘deforestation-free’. In August 2015, Fefac published the first version of the European feed industry soy sourcing guidelines, setting 59 baseline criteria (37 essential and 22 desirable).

More than 160 European compound feed manufacturers have now committed to the ‘responsible sourcing of soy in accordance with the guidelines in an effort to boost the development of a mainstream market of responsible soy use in Europe’, Fefac said.

Figures released this year by IDH, the sustainable trade initiative, show that in 2017 Europe used an estimated 34.4m tonnes of soybeans, soymeal and soybean oil, of which 7.6m tonnes (22%) was ‘responsible’ (compliant with the Fefac soy sourcing guidelines) and only 13% was deforestation-free.

The UK fared slightly better, with 37% adhering to Fefac’s rules and 14% deforestation-free.

Why are the figures so low? After all, there certainly isn’t an issue with supply: in 2018, 4.5m tonnes of soy certified through the Roundtable on Responsible Soy (RTRS) was available, but only 2.8m tonnes was bought (forcing producers to sell some on the cheap). “This is about whether there is enough actual demand,” said Nienke Sleurink from IDH.

But in the UK, this could be about to change. “The lack of demand has been holding us up [but]we are now starting to see demand [for sustainable soya]come through,” said Mr Major.

A new industry roundtable has helped, he said. In March last year, the government convened the first meeting of the UK Roundtable on Sustainable Soya (RTSS, not to be confused with the RTRS).

Signatories include the major supermarkets (bar Morrisons), plus the likes of Tulip and Cranswick. The NPA and Fefac are also involved. All members had two things in common: they were heavily reliant on soya and were struggling to make headway on their zero deforestation commitments.

“Our overall objective is to support signatories’ commitment to soya that is legal and cultivated in a way that protects against conversion of forests and valuable native vegetation,” explained Jonathan Gorman, technical director at Efeca, the consultancy firm helping to coordinate the roundtable.

Eight major supermarkets, representing 1.2m imported tonnes of soya, have now published action plans detailing how they are going to deliver on their promises. Though the 2020 target won’t be met, the pace is certainly picking up.

But how fast can the market move? The end of 2020 isn’t unrealistic, according to WWF-UK’s head of food commodities Emma Keller, who said ‘every bean’ could be zero deforestation and zero conversion (non-forest natural habitats) within 12 months. “Soya production could double or triple by 2050 without chopping down a single tree,” she said, provided there is the right commercial and political will.

However, between the three major suppliers – Brazil, Argentina and the US – you’d be hard-pressed to choose the least politically stable at the moment. Donald Trump’s trade and tariff war with China has ‘reshaped the global market for soybeans’, according to analysis by Euractiv.com, diverting produce from Brazil – originally intended for Europe – towards China, and slashing the price of US exports.

This time last year, the US share of soybean imports to the EU was 39%; now it is almost 75%. Meanwhile, in Brazil, the election of president Jair Bolsonaro, heavily criticised over the forest fires, has heightened anxieties amongst campaigners.

The UK pig sector has taken note, too, according to Lizzie Wilson, the NPA’s policy services officer. “It’s historically been a volatile market, but soya is on our members’ radar more so than ever due to the public and media scrutiny,” she said.

Ms Keller highlighted what has happened with palm oil – another critical commodity for the food sector that is now so inextricably linked with deforestation that some retailers have started to ban it from their products. Public pressure is forcing companies to look at alternatives, which might actually come with greater environmental baggage than palm oil.

Now the spotlight has turned on soya. However, the list of alternatives to this precious protein is short: novel feeds, like algae, show potential but are not yet proven or permitted, as is the case with insects (see box).

Another option – and one the EU is keen to explore – is to grow more soya domestically, where it is GM-free, fully traceable and not from deforested land. Given that the EU’s soya self-sufficiency is just 5%, protection from the vagaries of the market and the whims of politicians would also be welcome.

The area used to grow soya in the EU has already doubled to almost 1m hectares since 2013, with production up to 2.8 million tonnes. A European ‘plant protein plan’ published in November and a new post-Brexit agricultural policy in the UK promise more.

In the UK, 3,200 hectares of soya was planted last year. David McNaughton, director at Soya-UK, which supplies seeds and advice to UK farmer, said he was hoping for another ‘significant jump’ this year. The margins can stack up well, with hard IP (identify preserved) soya fetching around £400 per tonne, compared to £340 for the ‘any origin’ market, he said.

Of course, if you are a buyer then local soya will cost you more. Who will pay the additional costs of sustainable soya is a moot point.

Globally, RTRS is the most widely-used certification scheme for sustainable soy, but the scheme represents just 1-2% of the market currently. The price is apparently putting the brands and retailers off – even though it amounts to just 1%, or $2 to $3 per tonne.

There is a fear in the UK that it won’t be the supermarkets picking up the bill. “There are lots of retailers busily making commitments, and as always these come with a cost and as always this is passed on to producers,” Mrs Wilson added. “We have a responsibility [to source sustainably]and the scrutiny is going to increase.”

However, she warned that producers must not be ‘unfairly disadvantaged in order to meet the retailers’ commitments’. “The retailers can’t expect us to cover their costs,” she adds.

As yet there hasn’t been an analysis of the costs of meeting the sourcing promises, but the pig sector has faced similar challenges before in relation to feed. A few years ago, UK retailers started introducing well-publicised policies to use only non-GM feed in their supply chains. However, these were quietly mothballed as supermarkets quickly realised how difficult sourcing GM-free soya was going to be.

In a YouGov poll of 2,106 UK consumers published in May, 66% said the government isn’t doing enough to tackle deforestation. It was part of a wider poll of almost 21,000 Europeans, of which 87% want new laws to protect forests.

In reality, tracing soya through the supply chain from feed trough back to plantation is notoriously tricky, not to mention expensive, which is why many companies haven’t bothered.

However, they can’t afford to waste another decade as ‘frankly, there won’t be any forests left’, Ms Keller said.

Alternatives to soy are in abundance but few have yet to catch on. This tends to be because they are unfamiliar, more expensive (not always) and come with anti-nutritional factors (not always true). Some of the options include:

Lupins. Protein value is comparable to soy, but they are not easy to grow in the UK. “You’ll find people who regret growing lupins, but you won’t find anyone who regrets feeding them,” says McNaughton.

Insects. Trials show potential and the EU could soon approve the use of insect protein for pig and poultry feed (live insects and insect oil are permitted but not insect meal). There are ethical and sustainability considerations too, including what to feed the bugs on.

Algae. Showing promise, given that they are sustainable, high in protein (up to 70%) and can boost quality in eggs. They could even reduce reliance on antibiotics. Currently expensive.