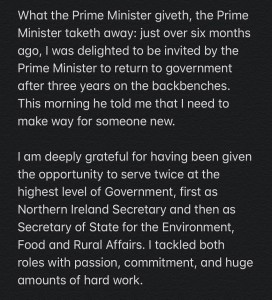 A keen Brexiteer, Mrs Villiers failed to connect with the farming industry during her time in the post and was not seen as someone who would fight the industry’s corner in the battles ahead.

Her last major acts before leaving the post included publishing the revised Agriculture Bill, which received a warmer reception among farmers than Mr Gove’s original as it did more to recognise the importance of food production, and the Environment Bill.

From a pig industry perspective, Mrs Villiers was seen as a driving force in the Government’s desire to phase out farrowing crates. Along with fellow Defra Minister Zac Goldsmith, she was an active campaigner on farm animal welfare, including being a vocal supporter of CIWF’s ‘End the cage age’ campaign before coming into the job.

Speaking at the Oxford farming conference in January, she said: “Certainly, both Zac and I want work with the agriculture sector to see if we could move towards a point where could start to phase out these methods of production.”

In her statement today, Mrs Villiers defended her record at Defra and pledged to continue to fight to ensure farmers are farmers are ‘not undercut by food imports produced to lower welfare standards than ours here in the UK’, an issue she was repeatedly questioned during her appearance at Oxford.

“While my time at Defra was short, I am proud that under my leadership, we published the most important Environment Bill for decades, setting out a world leading framework to protect nature, improve air quality and tackle plastics pollution; we published an Agriculture Bill with environmental goals at its heart; and a Fisheries Bill which will take back control of our waters and start to reverse the betrayal of our fishing communities which took place when we joined the EU.”

“I also played my part in drafting a Conservative manifesto with stronger commitments on the environment than ever before, including the most ambitious programme any government has ever proposed on planting millions of trees.

“I have driven forward animal welfare improvements and during my tenure at Defra, this government has made a commitment to end the live export of animals for slaughter. We are also banning imports of trophies hunted from endangered animals.

“I have championed our farmers and secured a five year guarantee from the Chancellor on maintaining the farm support which is so vital to helping them produce the high quality, high welfare food which sustains us. I have spoken out strongly on the importance of ensuring our trade policy does not compromise our high standards of food safety, animal welfare or environmental protection.

“I remain determined to ensure that our farmers are not undercut by food imports produced to lower welfare standards than ours here in the UK.”