Within the number of pigs for slaughter, the greatest declines were seen in those weighing under 23kg (50lbs), followed by those weighing between 23-54kg (50-119lbs). 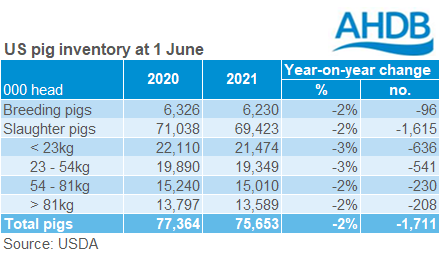 Between March-May, the number of pigs weaned in the US dipped 3% year-on-year to 33.6 million head, which Ms Clark said could partly explain the lower numbers of lighter pigs in the inventory. T

he average litter size over that period was 10.95 pigs per litter, down slightly from 11.00 during the same period a year ago.

A total of 3.01 million sows farrowed during the same period, down 3% on the year.

Reports suggest that some US pig producers have had issues with herd health of late, which could partly reflect the lower breeding numbers.

Looking forward, Ms Clarke added: “Farrowing intentions for summer and autumn are also lower in comparison to the previous two years, which could indicate some reduction in slaughter numbers in subsequent periods.

“US hog prices had been rallying strongly since the beginning of the year. However, at the beginning of June, reports suggest the market reacted to news of the size of growth in the Chinese herd, dramatically reversing its bullish trend.”