Falling shipments from the Netherlands and Denmark were primarily responsible for the overall decline, dropping back 17% (800 tonnes) and 5% (600 tonnes) respectively. Since September, EU prices have fallen faster than those in the UK. This may once again stimulate imports in the latter months of the year, and so put pressure on UK prices. 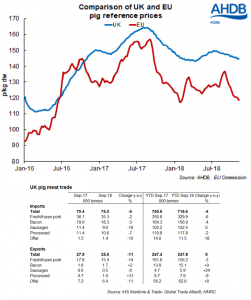 Exports of fresh/frozen pork fell in September to 15,400 tonnes, a decline of 14% year-on-year. The year to date figure is also 3% down year-on-year for pork alone, despite stability for pig meat overall. The value of pork exports has fallen by 5% to £209 million in the year to September, reflecting a challenging global market.

The decline in exports in September was almost entirely driven by a lack of shipments to Denmark during the month, product that is likely normally re-exported elsewhere. This aside, there was actually some strong growth in exports to other destinations during the month.

Perhaps the widely reported problems in China are starting to feed through, and UK exports in September rose by 24% (700 tonnes) year on year. Shipments to the US also doubled (+500 tonnes), which is particularly encouraging as this is a high value market for UK product.