However, AHDB said that, given the widening price differential between farmgate pig prices in the UK and EU, UK pig meat imports remained at relatively low levels during August, with the 2% increase following a 3% increase in July.

“Looking at fresh/frozen pork, volumes were still a little lower than August 2020. There were lower volumes coming in from several EU states, most notably Ireland. However, this was largely counteracted by increased shipments from Germany and Belgium,” AHDB analyst Bethan Wilkins said.

“The German market is currently unable to export to most countries outside of the EU due to African Swine Fever cases within its borders. Most markets it can access have therefore taken more German pork this year, and German prices have faced downward pressure.

“Imports of bacon were higher than last year during August. However, imports were particularly low at this time last year, and compared to July 2021 volumes were 3% lower. The Netherlands and Denmark continue to dominate this market.” 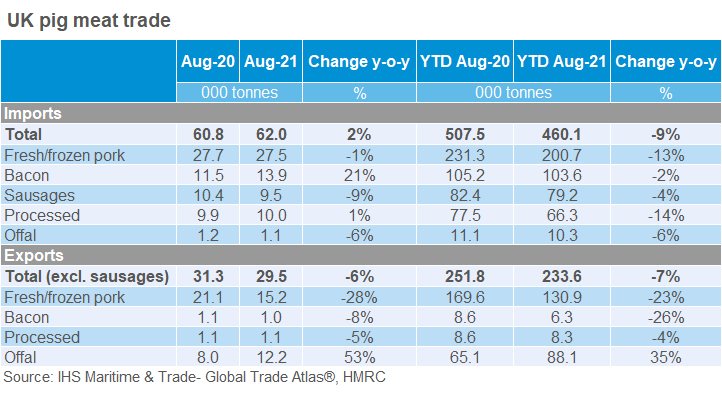 She stressed, however, that import volumes might have increased since August, with the continued increase in the number of consumers eating out, as well as increasing price competitiveness of continental pork.

“European pork can also exert price pressure on UK product without being imported, so long as the potential remains. The average price of pork imported during August was £2/kg, 10% lower than last year,” she said.

Fresh/frozen pork export volumes in August were over a quarter lower than a year earlier, at 15,200 tonnes, though this was 5% higher than July 2021.

“Much of the year-on-year fall can be attributed to lower shipments to China, which fell to just under 6,000 tonnes. Exports to the EU were also lower though, particularly influenced by falling trade with Germany and the Netherlands,” Ms Wilkins added.

Bacon and ham exports also continued to see some decline. The published sausages figure appears unusually high and is currently being queried.

In contrast to the overall trend, UK offal exports were higher than a year earlier. Shipments to China continued to show robust growth, despite a challenging muscle meat trade. Volumes to this key market were up by 56% compared to last year, totalling 6,200 tonnes.