The VARSS report, released by the Veterinary Medicines Directorate (VMD) today, showed a further reduction in the amount of antibiotics sold for use in food-producing animals, at 30.1 mg/kg – less than half the levels recorded in 2014 and the second lowest-recorded level on record. The UK now has one of the lowest levels of antibiotic use in Europe, following a 52% reduction between 2014 and 2020. 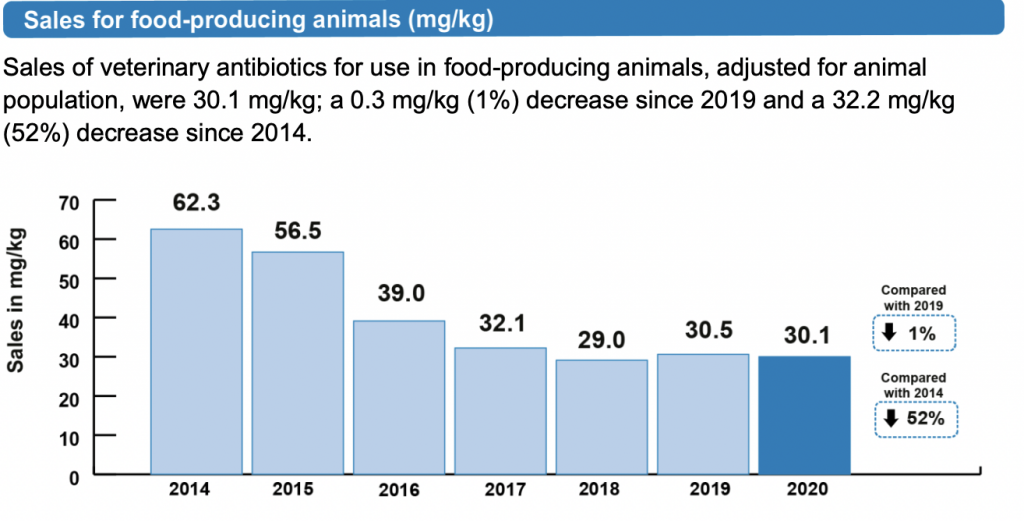 Overall usage of HP-CIAs – which are vitally important for human medicine and therefore a potential driver of antimicrobial resistance – fell for the sixth consecutive year of declines, giving a total reduction of 79% since 2014. They now account for just 0.5% of total antibiotic sales in 2020. 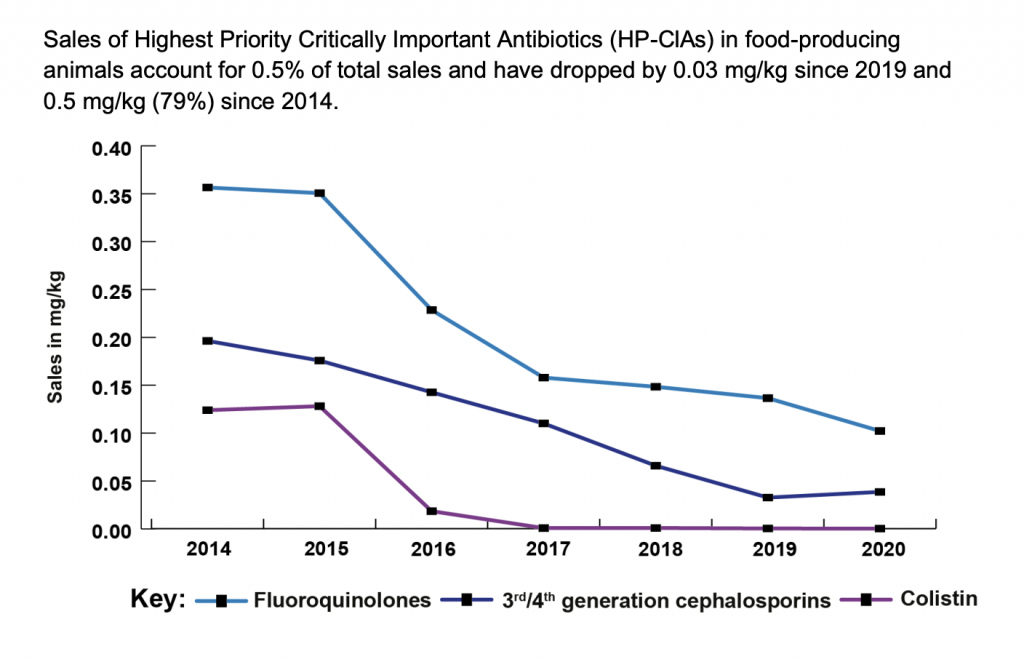 According to internationally recognised indicators, the UK has achieved some of the lowest levels, and biggest reductions, in resistance in livestock across Europe. E. coli carrying resistance genes to HP-CIAs continue to decrease.

The VARSS report broke down some of the key indicators for each sector. For pigs, highlights include: 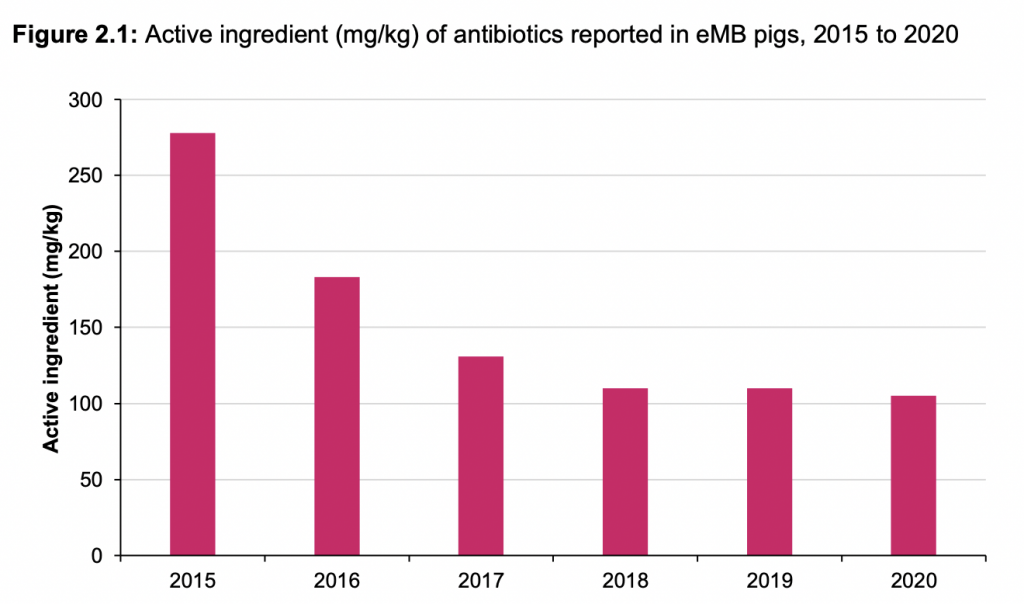 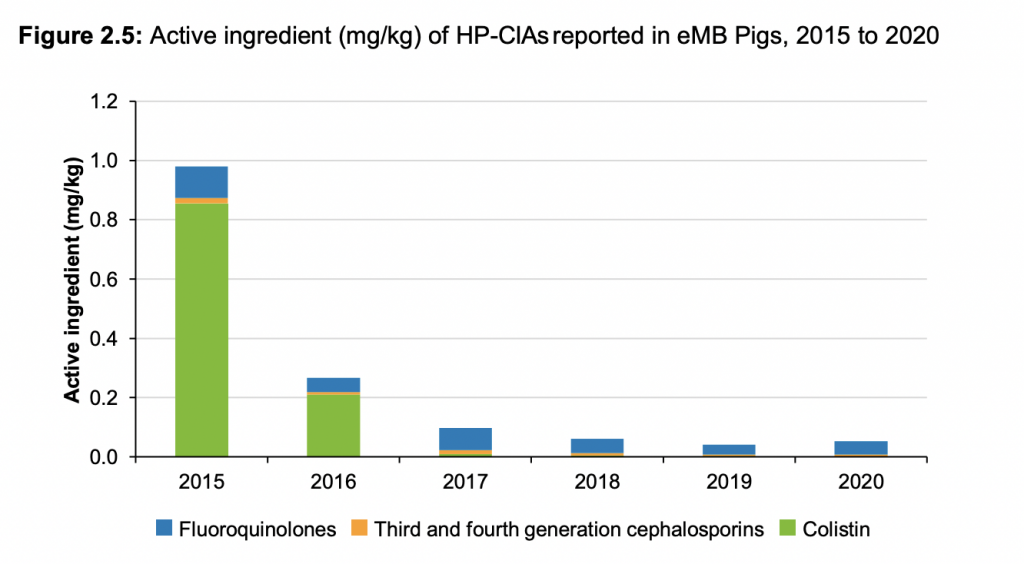 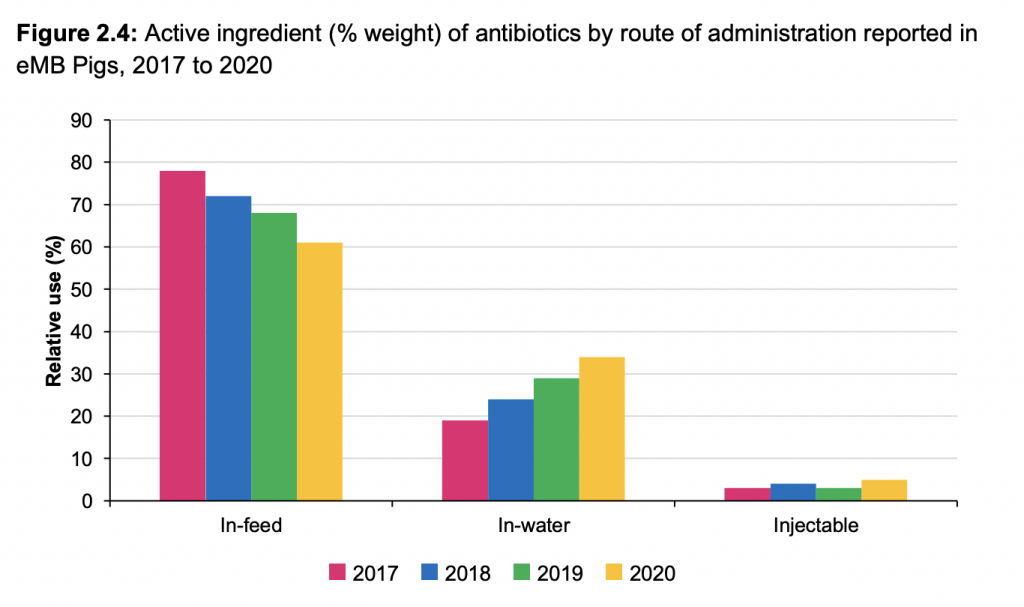 The ‘one year on’ RUMA Targets Task Force 2 (TTF2) summarises progress so far against the second set of antibiotic use targets which span 2021-2024.

It notes that the unprecedented nature of the past year has resulted in ‘significant industry challenges including supply chain resource and infrastructure issues, and labour difficulties’, which have far-reaching and varying impacts, particularly for pigs. This means that some of the figures reported are not representative of a ‘normal’ year of activity, it said.

“However, despite these difficulties, pig producers, vets and wider industry continued to meet high health and welfare standards and reduce the level of antibiotic usage to 105 mg/PCU,” the report concluded,

The pig sector continued to see some impact from swine dysentery cases in 2020 with some large herds undergoing a medicated disease elimination programme, although use due to this issue was lower than in 2019, while the Pig Health Scheme, was put on hold due to COVID-19. However, the report stressed how the industry ‘continued to manage through this challenging period well’.

“During the latter part of 2020 there was considerable disruption to pig flow, which meant pigs remained on farm for significantly longer periods of time. Health and welfare remained a top priority and the industry managed very well, even carrying out virtual veterinary visits where necessary to ensure veterinary oversight was maintained,” it said.

In terms of 2020 targets, the report noted good progress on:

Progress has also been made on various other targets, including monitoring the effects of reduced antibiotic use annually, reducing overall usage by 30% by 2024 from a 2020 baseline and maintaining HP-CIA usage at 2019 levels or lower.

Abigail Seager, Chief Executive of the Veterinary Medicines Directorate, said: “Working closely with the farming industry and the veterinary profession, we have achieved huge reductions in the use of antibiotics since 2014 and we are seeing reductions in resistance as well.

“These successes are testament to the cooperation between farmers and vets in promoting the responsible use of antibiotics.”

Christine Middlemiss, the UK’s Chief Veterinary Officer, said: “This year’s VARSS report shows how the UK continues to make important reductions in antibiotic use in livestock across the board.

“It is encouraging to see farmers and vets continuing to work together to tackle antibiotic resistance through the responsible use of antibiotics, which in turn protects human health as well as reducing the burden of disease in animals. We are committed to protecting animal health, and we will continue to work closely with industry and the veterinary profession on this important issue.”

NPA chief executive Zoe Davies said: “At a time when we really need some good news, these come as a timely reminder of the effort and commitment put in by the industry to reduce antibiotic use in a responsible manner without compromising the health and welfare of our pigs.

“It has been a team effort all along, with producers, vets and others working together. The RUMA report highlights the fact that we continued to make progress amid all the challenges of last year, so all involved deserve real credit.

“The latest targets announced last year, move away from purely numerical reductions to more holistic aims and aspirations. We support these targets and will continue to help the British pig industry work towards them.”

“It is important to remember that the targets are not about driving towards zero antibiotic use; antibiotics are needed when necessary as a tool to treat sick animals and to improve and maintain animal welfare. Each sector will ultimately reach a sustainable level below which further reductions could negatively impact animal welfare.”