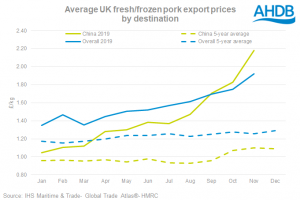 In contrast, offal exports have come down 6% from November 2018. This largely reflects lower shipments to Hong Kong. It remains plausible that some traditional offal exports are now being exported to China as part of pork shipments. More pork is being drawn to the Chinese market, which requires minimal processing. If less processing is underway, this could reduce the production of offal products on their own. 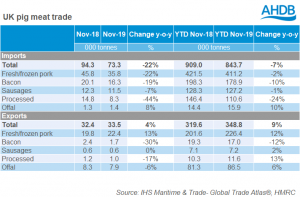 During the month, the volume of pork imported to the UK decreased by 22% compared with November 2018. The decline in imports generally escalated as 2019 progressed, with shipments only down 2% for the 11 months overall. Considering the relatively high price of imported pork, imports would be expected to fall back.