Meanwhile, shipments to the Philippines continued to see strong growth, with volumes increasing over fifteen times compared to May 2020, totalling 1,900 tonnes.

The value of UK exports of fresh/frozen pork only decreased by 4% in May, compared to the month last year, to £33.4 million.

“Despite falling wholesale prices within China, it seems prices for our exports to China were still stronger than last year, which mitigated the effect of the decline in volume,” Ms Wilkins said. 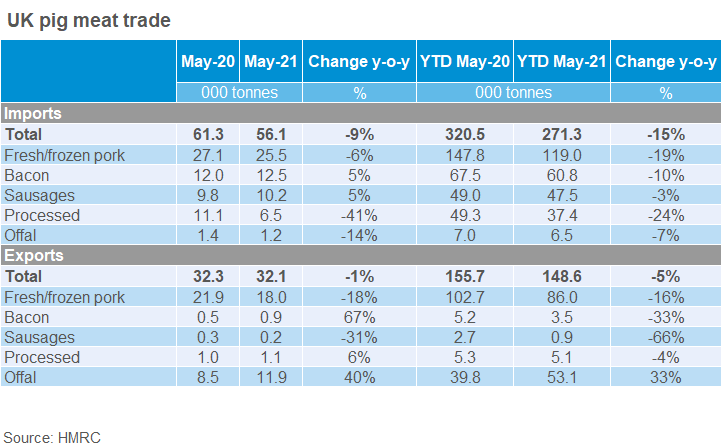 Offal exports remained significantly above year earlier levels in May, increasing by 40% to 11,900 tonnes, with offal shipments to China were up by a quarter to 6,500 tonnes and trade with the Philippines was nearly ten times higher than last year at 1,100 tonnes.

There was an even stronger increase in the value of offal shipments, which reached £16.2 million, about two-thirds more than last year.

In total, the value of UK pig meat exports totalled £55.8 million in May, which was 10% higher than last year.

The average price of fresh/frozen pork imported into the UK was £2.23/kg, 6% behind May last year.

“European farmgate pig prices increased significantly throughout May and were above year earlier levels by the end of the month, but this does not seem to have fed through to pork import prices at the time,” said Ms Wilkins. “The value of pork shipments was £57.0 million, 11% lower than last year.

“The large decrease in processed ham imports is particularly influenced by a drop in volumes from Poland, which approximately halved year-on-year.

“However, at the same time, the value of this trade reportedly more than doubled. This is a rather unusual set of trends, and suggests the processed ham import figures should be treated with some caution at this time.”