“The level of promotional spend has gone back to levels not seen since before the 2008/09 economic crisis,” observes Mike Watkins, Nielsen’s UK head of retailer and business insight. “The last few years, have seen about a third of the typical supermarket shopping bill going on promotional items. However, to be more price competitive, supermarkets have turned temporary price reductions into permanent cuts, so there’s less promotional activity as many prices are cheaper all-year round.

“There’s also been a shift away from multi-buy to simpler price cuts, which is in tune with shopper needs to make it easier to manage their basket spend.”

In terms of individual supermarkets outside the discounters, Iceland was the best performer over the last 12 weeks in terms of year-on-year sales (up 5.2%), followed by Marks & Spencer (+2.6) and the Co-operative (+1.2%), while Morrisons was the only one of the Big Four to see year-on-year sales rise (+0.6%). 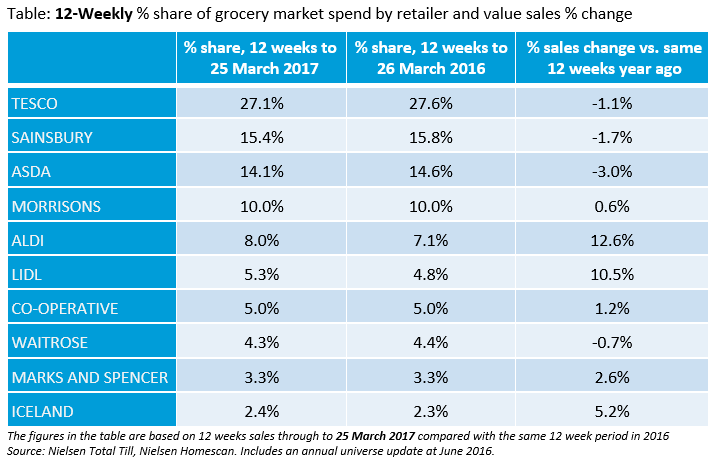 “Looking ahead, supermarket growth will come from exploiting the “little and often” shopping trend , product innovation including private label and food to go, as well as maximising sales during seasonal events such as Easter,” concludes Watkins. “Supermarkets are well placed to fulfil these mission-based shopping trips and increase total store spend through different and larger store formats which highlight the breadth of range not available at a discounter. This is particularly important with many retailers reviewing business models in light of the shift to omni-channel retailing.”
Get Our E-Newsletter - Pig World's best stories in your in-box twice a week
See e-newsletter example
Will be used in accordance with our Privacy Policy