The most dramatic increase has been seen in Germany, where after a long period of over-supply and rock-bottom, the market has turned on its head, with the German reference price up from 107p/kg in mid-February to 164.6p/kg by the end of March.

In Spain, the reference price has risen from 112p/kg in late-January to 158p/kg in late-March, while the Polish price has soared from 106p/kg in late-February to 156p/kg. France and the Netherlands have seen notable hikes, although the Danish price remains relatively low at 115.5p/kg. 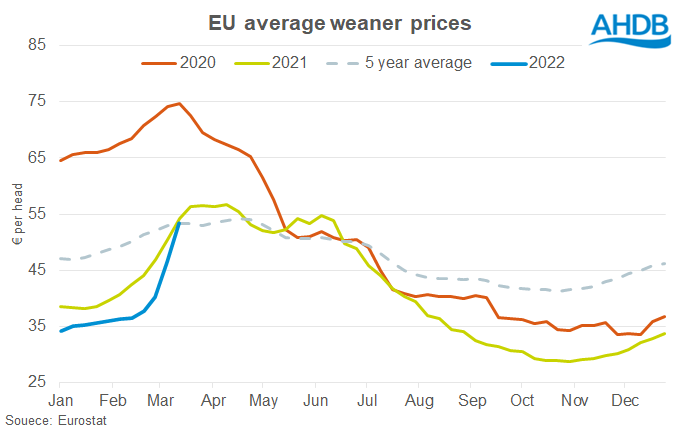 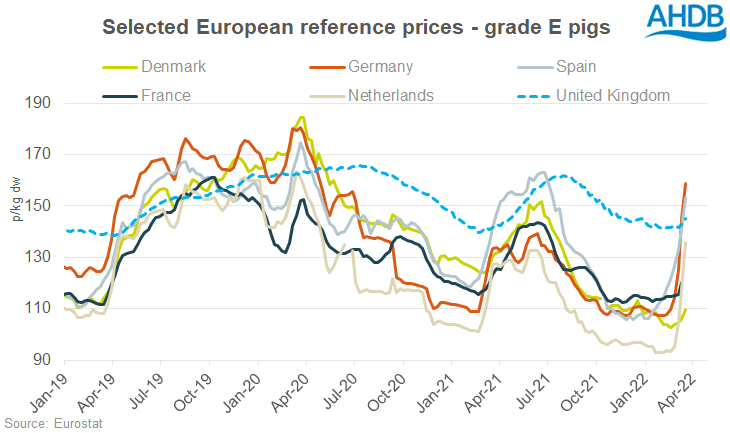 AHDB analyst Duncan Wyatt said: “Prices of all categories of pigs are rallying strongly in the EU, from weaners to sows, perhaps starting to bring the idea of relief to pig producers across the bloc. Finished pig numbers are tighter, and prices for them are rising rapidly.

“However, prices are still some way short of the cost of production in most cases, and so very many producers will still be facing negative returns and cashflow problems. This follows the rapid and sustained increase in input costs, not least feed. It’s worth remembering that costs were already high and rising, even before Russia invaded Ukraine.”

Against this backdrop, as pig supplies are tightening, it might seem surprising that the European Commission has just launched a private storage aid scheme to clear supplies of pork from the market.

The Commission confirmed last week that applications can be made until April 29, for a storage period of between 60, and 150 days. Each application must cover a minimum quantity of at least 10 tonnes for boned products and 15 tonnes for other products

The Commission announced market safety-net measures to support the pigmeat market ‘in view of the particularly difficult situation of the sector’.

This is part of a wider package to support EU farmers in the wake of the Ukraine crisis. The UN Food and Agriculture Organisation (FAO) has warned the world could ‘easily fall into a food crisis’, amid food shortages and soaring prices, with poorer countries bearing the brunt.

At least 50 countries depend on Russia and Ukraine for 30% or more of their wheat supply, with Ukraine responsible for 12% of global wheat exports, and there have already been massive price hikes of wheat, barley, rapeseed and sunflower oil. After Russia stopped exports of fertiliser, prices hit £1,000/tonne in March, 200% up year-on-year, while everyone is braced for even higher energy prices.

The EU has recognised the situation and on March 23, the Commission responded with a package of measures to ‘enhance global food security and to support farmers and consumers in the EU in light of rising food prices and input costs’.