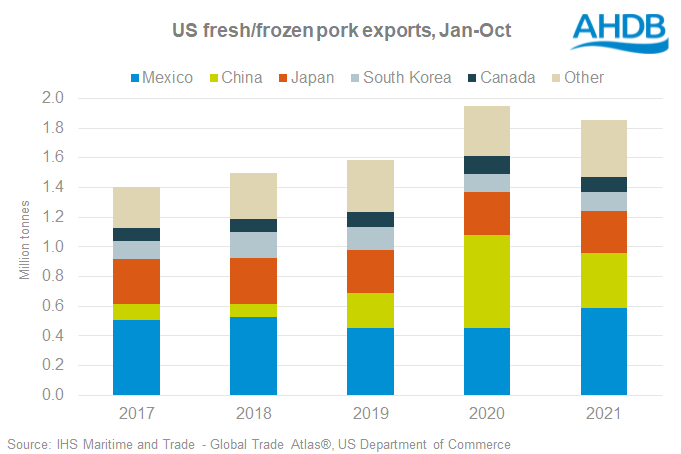 Looking at the third quarter of 2021, AHDB analyst Bethan Wilkins noted that shipments were the lowest so far this year at 704,000 tonnes, but that this remained 2% higher than the same quarter last year despite volumes dropping 5% below last year in October.

“Some of the markets that had been showing strong growth, compensating for lost Chinese demand, eased,” said Ms Wilkins. “This was particularly the case for the Philippines. Although these exports had nearly doubled for the year to October overall, totalling 78,000 tonnes, shipments in the third quarter alone were 17% lower than a year earlier.

She noted that the weaker price competitiveness of US pork for much of this ultimately started to dampen international trade prospects, and that weakening Chinese import demand in the second half of the year in would have increased competition on alternative markets from other global exporters around this time.

The latest USDA forecasts for US pork exports (not including offal) anticipate a 1% decline in export volumes this year, although a 3% recovery in expected for 2022.