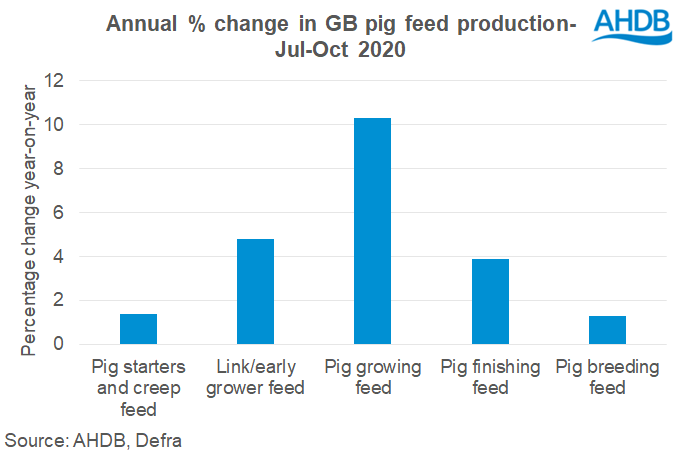 “The higher volumes support our expectations that there has been some expansion in pig numbers available,” AHDB analyst Bethan Wilkins said.

“Currently, the effects of the COVID-19 pandemic are challenging processing and this seems to be leading to a backlog of pigs held on farm. Expansion in pig numbers compared to previous years may have accentuated this difficulty.

“Of course, if pigs are being kept on farm for longer, this will increase feed requirements and may account for some rise in pig feed demand going forward. Some producers are reportedly now using ‘holding diets’ in an attempt to slow pig growth.

Pig feed costs have been rising recently and this will be increasingly limiting profitability for pig producers.

Between July and October, use of barley across compound animal feed overall was 27% higher than last year, reflecting increased price competitiveness relative to wheat, usage of which was down 12% on 2019.

All the other cereals covered saw higher usage than last year, although use of most oilseed meals/cakes across animal feeds was lower than last year, with the exception of oilseed rape meal/cake (+1%).

Overall production of animal feed, including integrated poultry units, was 1% up on July-October last year, at 4.46 million tonnes.