Asda also recorded a rise in fresh pork to 45%, sustaining its increase from November, although it remained the worst performer by a distance across the board, coming bottom of the pile for fresh pork, bacon and ham (36%).

But the biggest disappointment in the January survey was Tesco, which slipped back after its November gains, dropping 18% to 62% fresh pork facings, which is also 2% down year-on-year. Tesco was also 16% down year-on-year on bacon, at 35%.

Overall, British facings for fresh pork were down 2% on November to 79% and broadly in line with a year ago. All retailers except Tesco and Asda scored 100% for British fresh pork. British ham and sausage facings across the 10 retailers surveyed were up 3% and 2% respectively on the year to 65% and 85%.

The best supporters of British, in percentage terms were Waitrose and Marks and Spencer (close to 100% across the board). The Co-op, following its 2017 British sourcing commitment, is now close behind, with 100% pork and bacon, 39% up on the year, as well as 98% ham and 88% sausage. 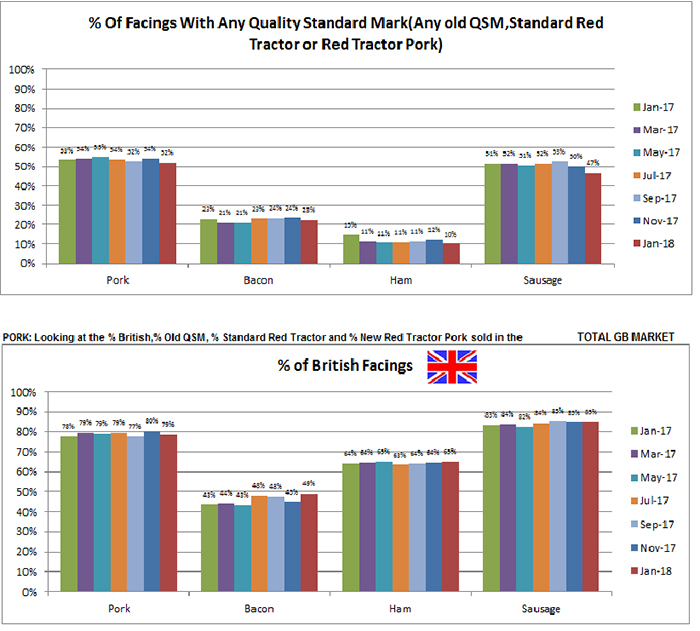 NPA chief executive Zoe Davies said: “Overall, the picture is brighter as most UK retailers are sourcing more British bacon than a year ago.

“Asda has made the biggest improvement and we welcome that, although it still has lots of work to do, while the Co-op deserves a special mention for its valiant commitment to British pork, which is clearly illustrated in this survey.

“We appreciate the efforts of all those retailers who are showing support for British pig producers and understand how their consumers value the excellent products we produce.

“The figures for Tesco are a disappointment, as it seems the progress it made before Christmas has been lost.

“Our message to consumers is to continue to look for British Red Tractor assured pork, in  the supermarket and on restaurant menus, for peace of mind that it has been produced to the high standards that you expect.”