You can read the report here.

But, arguably, of even greater interest in the context of the ongoing debate about potential post-Brexit trade deals, the US 2017 cost figure was just 0.86p/kg, highlighting why there is such concern about the threat posed by cheaper imports produced to lower standards than permitted here.

The report showed the GB feed price increased by 16% in 2017, the highest by a distance of all countries covered in the report and more than double the average EU increase of 7%. 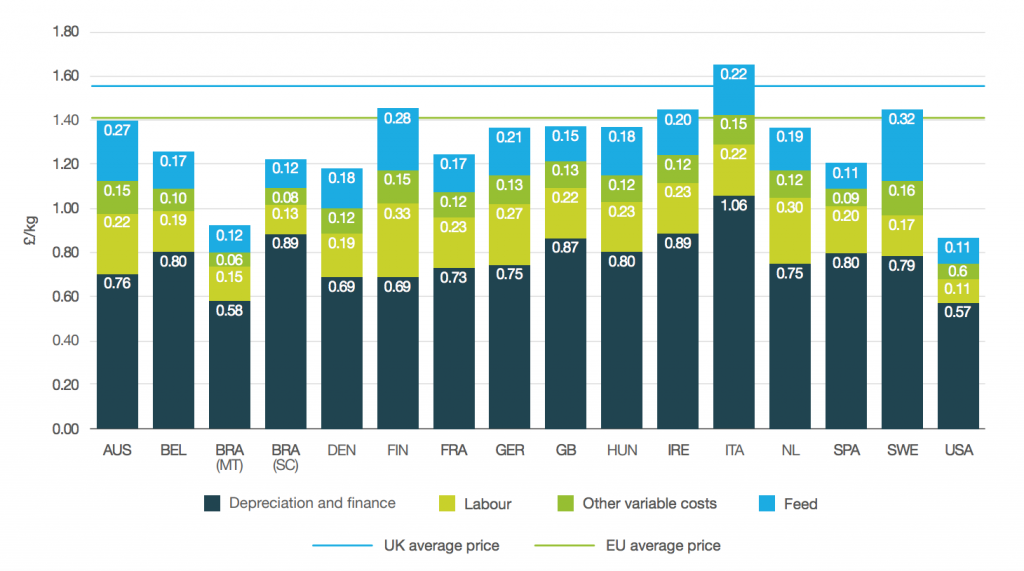 The biggest factor in the increase in costs in 2017 was feed price on the back of rising cereal and protein prices. Nearby UK feed wheat futures started the year at their highest level since January 2014, at £145.76 per tonne, 33% higher than a year previously, and although the eased later in the year, remained relatively high. Soya prices were also high.

The report also highlighted the variability in producer margins over the past few years as costs and pig prices have fluctuated.

The overall average number of pigs weaned per sow per year in the EU InterPIG countries increased by nearly 2% in 2017 to 27.79, with Denmark achieving 33, the Netherlands just over 30 and Belgium 29.8.

There was a difference of 8.5 pigs weaned per sow per year between the highest and lowest performing EU countries, with Italy averaging just 24.8.

GB produced nearly 2 tonnes of carcase meat per sow in 2017, 5% higher than in 2016, due to a combination of the increase in the number of pigs finished per sow and an increase in finishing weight.