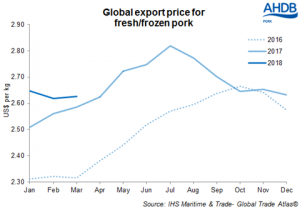 Bethan Wilkins, an analyst at AHDB Pork, said: “Looking forward, a number of political factors currently in play could alter the relative competitiveness of the key exporting nations. Concerns over the political situation in Italy and the possibility of a trade war escalating between the EU and US have seen the euro fall in recent weeks, which should help support EU export prospects. How trading relations between the US and EU develop in the coming weeks will remain key for the currency outlook. 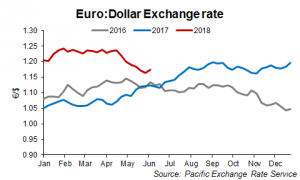 “Developments in US trade policy will also have a direct influence on the global pork price outlook. Since April, US pork has been disadvantaged on the Chinese market by an additional 25% import tariff, and now Mexico have also implemented tariffs on US pork. This could significantly limit US pig price prospects. Although so far, the impact on US futures prices has been limited, suggesting there is optimism that continued trade negotiations may be able to overcome the news.

“Nonetheless, if Mexico does persist with implementing these tariffs, the repercussions could be significant. While US trade may be at risk, opportunities could open up for other exporters to displace the US product, altering the supply and demand balance in the key exporting nations (read more here). Politics therefore has a key role to play in the global pork market for the rest of this year, making the outlook increasingly uncertain.”