These are then combined with productivity data to provide an Animal Welfare Index Score that creates a measure of welfare that can be used to assess, monitor and improve animal welfare, and also compliance with the various audited on-farm requirements.

Greengage’s chief commercial officer Tim Hodgetts said the company was ‘surprised and delighted to win’. “We’ve launched the AWIS here and we are getting a lot of traction from people who resonate with animal welfare, which has always been at the heart of anything we do,” he said. 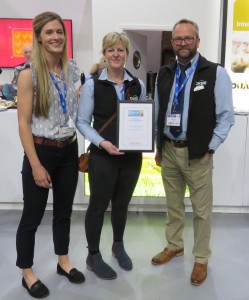 There were two Highly Commended runners up – Cargill’s BehavePro L, a fast-acting liquid solution which has been shown to calm pigs and Dalton Engineering’s Silo Weighing system with an app.

Cargill technical sales manager, swine, Jason Evans, said: “It is a great product, and we feel highly honoured to be highly commended in this award. We think it is very much worthy because we are getting such great traction with it. It does exactly what it says on the tin. There’s been a lot of interest with producers – they are keen to use it.” 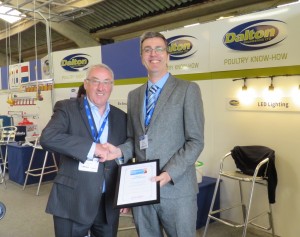 Dalton’s system allows silos to be weighed without the need for lifting them onto load cells. It simply attaches to one leg of the silo and transmits live data to a cloud-based app. The system can predict when feed needs re-ordering, while wireless connectivity makes it easy to use and install with a battery life of up to 5 years.

Dalton Engineering sales director Gary Walker: “It is a new technology that we are really excited about.

“We have put a lot of work towards getting on to the market and the response over the last two days is phenomenal. People can see the benefits of having such a good technology. So, to get this is just brilliant.”