Feed costs continued to rise in Q3, which accounted for the majority of the rise in production costs (+2p).

Higher feed prices and increased feed usage both contributed to the rise in costs. ‘Other’ variable costs also recorded a slight uplift compared to the previous quarter (+1p).

This was due to the sharp drop in cull sow prices, which made breeding costs more expensive. 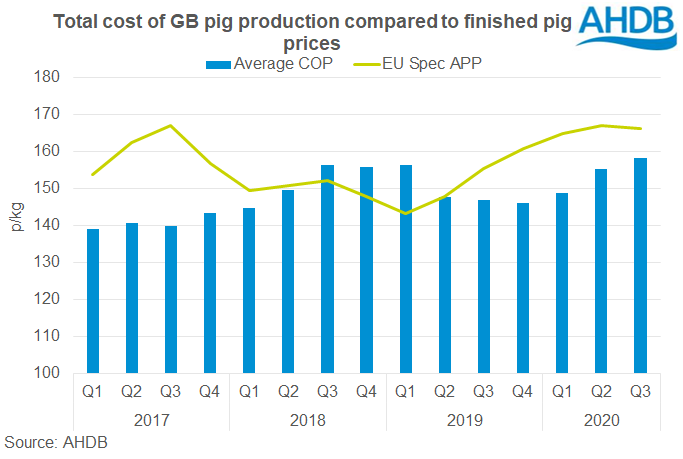 GB finished pig prices have fallen further in recent weeks. The EU-spec APP was only about 159p/kg by early November, just above our estimated average production cost for Q3.

“With this in mind, it looks like average margins could now be entering negative territory,” AHDB analyst Felicity Rusk said.

“The outlook is challenging for the British pork industry currently. Supplies available are testing demand levels, particularly as processors tackle lost efficiency as plants adhere to social distancing measures, while reports indicate pigs are backed up on farms.

“This, alongside the likelihood of more muted Christmas demand and ongoing low prices in wider Europe, will likely keep British prices under pressure in the coming weeks.”