2018 looks as if it may surpass the record 2017 levels; already in the year to date (Jan-Apr) pork imports are 25% higher and offal imports are 31% higher compared to the same period last year. The latest USDA forecasts anticipate an 18% increase in pork imports for the year overall. 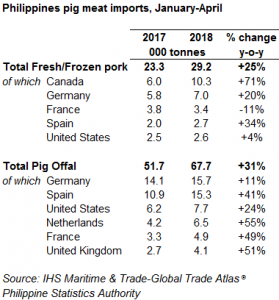 This is perhaps not surprising, since the Philippine pig industry is going through a modernisation period. Last year, the ‘Hog Industry Roadmap’ was published, a plan to address some of the major challenges facing the domestic industry over the next decade. The plan involves increasing the number of pigs sold/sow/year from 18.8 in 2015 to 30 in 2027 and doubling carcase meat production/sow/year to 3.5 tonnes.

These targets reflect a need for the Philippine pig industry to modernise if it is to keep up with growing consumer demand. The latest OECD-FAO outlook anticipates consumption grew to 15.4kg/capita last year (+3% year-on-year), and is now expected to reach 17.0kg/capita by 2027.

The long-term growth is even larger than that anticipated when the Hog Industry Roadmap was produced. To avoid losing out to increasing import levels, the domestic industry will need to become more consistent and efficient.

At present, imports can be favoured in the meat processing sector, due to higher quality and presentation standards.

While commercial pig production does seem to be picking up in the Philippines, it remains to be seen whether the industry will achieve its ambitious targets over the next decade. As such, it looks as if the Philippines is set to continue being a valued and growing export market for the UK, in the near future at least.