This year’s Outlook projects an expansion in meat supply which should result in short-term meat prices declining relative to 2017. The herd rebuilding cycle observed in several regions is nearing an end and additional supply is expected to enter the market in the early years of the projection period. Feed grain prices are also projected to remain low during this period, benefitting regions – such as the Americas, Australia and Europe – where feed grains are more intensively used in meat production.

Global meat production is projected to be 15% higher in 2027 relative to the base period. Poultry meat remains the primary driver of the growth in total meat production, but in the coming decade this growth will slow significantly compared to that of the previous one. Growth in global demand for animal protein in the next decade is projected to slow down for poultry and pig meat, but increase for beef and sheep meat. 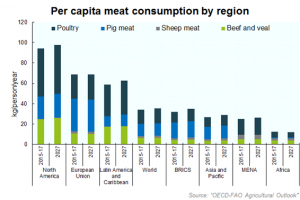 The combined share of the two largest meat exporting countries, Brazil and the United States, is expected to increase to around 47%, contributing nearly two-thirds of the expected increase in global meat exports over the projection period.

Globally, animal disease outbreaks (e.g. swine fever), sanitary restrictions, and trade policies remain the main factors driving the evolution and dynamics in world meat markets. The projections reflect the implementation of various trade agreements, domestic policies and sanitary and phytosanitary restrictions announced or in place by 1 January 2018. Uncertainties related to existing or future trade agreements over the outlook period could impact and diversify meat trade patterns. Domestic policies development could also impact the meat sector such as the review in 2018 of the US Farm Bill.

Further factors that could impact the meat outlook include consumer preferences and attitudes towards meat consumption. Consumers are showing a preference for free-range meat and antibiotic-free meat products, but the extent to which they are willing and able to pay a premium for them remains unclear.