During the 12 months ended December 31, 2020, the number of pigs weaned per sow per year decreased by 0.21 pigs, compared to the 12-months ending September 2020. This indicates that performance in Q4 2020 alone was worse than in Q4 2019, AHDB analyst Felicity Rusk said.

This was due to a reduction in litters per sow. An increase in pigs born alive per litter, and some decline in pre-weaning mortality, was able to compensate for the majority of these losses.

Conversely, the outdoor herd recorded an improvement – in the 12-months ending December 2020, on average 24.43 pigs were weaned per sow per year, 0.31 more than in the previous 12 month period. While the outdoor herd also recorded a decline in litters per sow, an increase in pigs born alive resulted in a considerable uplift in performance.

Both the indoor and outdoor herd saw below year-earlier performance for the Q4 period. 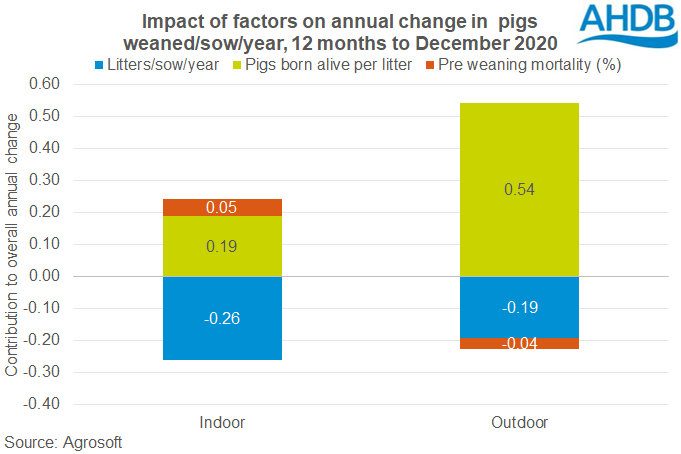 “Despite the overall improvement in breeding herd performance in 2020, the faltering picture in the latter part of the year could potentially lead to tightening numbers available for slaughter in the coming months,” Ms Rusk said.

“However, normal slaughter timings were disrupted over the winter, leading to a backlog of pigs on farms.

“Any previous declines in performance may be more difficult to detect in short-term slaughter numbers, because backed up pigs will need to come through. Of course, numbers available also depend on performance throughout the rearing and finishing stages.”

The latest physical performance data for the GB pig herd can be found on the AHDB website here.