AHDB’s dairy and livestock analyst Freya Shuttleworth explained that the drop in March’s year-on-year exports has been driven by the reduced demand for UK exports to China. As China has been rebuilding its pig herd since the ASF outbreak, this has resulted in the UK exporting 46% (5,300t) less pig meat to China, compared to 2021.

China’s ‘zero Covid’ policy, aimed at halting the spread of the virus, is also limiting Chinese import demands as well as impacting the fulfilment of shipments due to enforced lockdowns in the country. 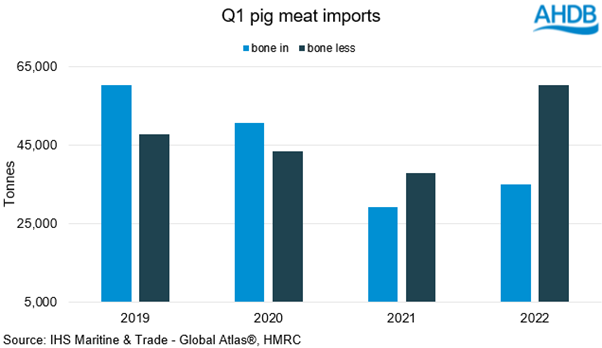 The type of products imported to the UK have also changed. With limited butchery capacity in the UK presently, boneless products were now the most imported products for 2021 and 2022. This is a reversal of the pre-pandemic and pre-Brexit trends which saw more bone-in products imported.