“This is a little earlier than we had anticipated in the forecast and means the growth in slaughter levels we forecast for Q2 is now likely to be lower than our forecast,” she said, adding that breeding herd productivity also appears to have been lower than expected at the end of 2020, which may again dampen supply growth in the coming weeks.

The slaughter pace was up in all countries, highest in England and Wales, where 14% more pigs were killed compared to March 2020. Growth in Scotland stood at 7% while Northern Ireland recorded a 5% increase. 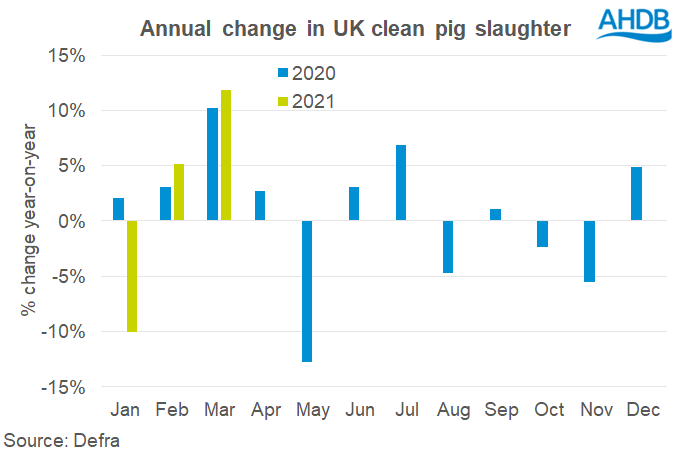 Clean pigs were also, on average, heavier than last year. The average carcase weight of 88.6kg was 2kg higher than a year before, although lower than the previous two months.

Difficulties marketing sows experienced in previous months eased and sow slaughter was elevated, with throughput during the month totalling 27,000 head, 27% (or 5,700 head) more than last March. So far this year, about 3,600 more sows have been slaughtered than in the first three months of 2020.

Ms Wilkins added: “”ith the rate of culling disrupted late last year and in early 2021, we would expect to see higher numbers coming through going forward. Poor profitability might also encourage some contraction in the breeding herd, which could also boost culling levels.”