In contrast, the EU reference price has rocketed by 30p/kg since early February to stand at nearly 147p/kg in mid-May, with major increases seen in all the big pig producing countries. This has been largely driven by increased export demand from Asia, where African swine fever has left huge holes in production. The stark contrast in EU and UK pork prices is illustrated below. 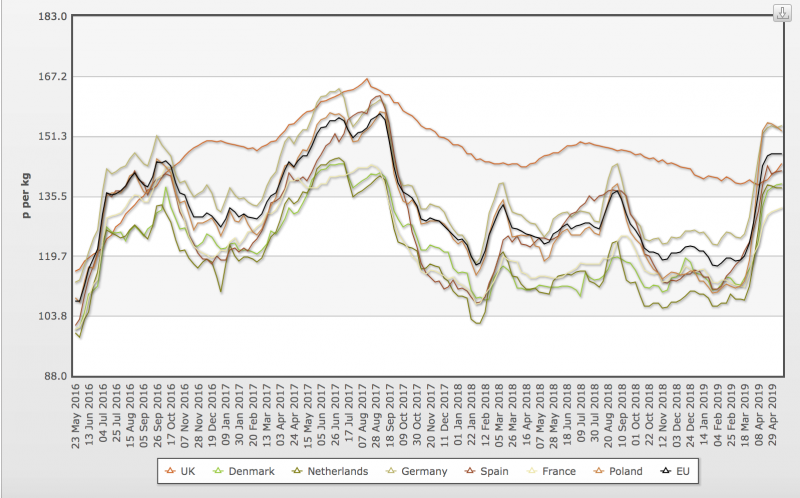 The real differential between average UK and EU prices will be larger than the 4p this suggests due to differences in how the published EU and UK figures are calculated. UK levies and haulage costs, plus the difference between hot and cold prices means you can add at least another 10/kg to that differential, NPA chairman Richard Lister said.

The failure of the UK price to come anywhere the EU equivalent means UK producers are losing millions of pounds each month at a time when they can least afford it.

In the last quarter of 2018, AHDB figures showed producers were typically losing £7/head. Average prices have fallen by a few pence during the first quarter of 2019 and into the second, suggesting these losses will have been growing – and sustained over a long period.

According to Tulip’s Andrew Saunders, processors have been making their way through thousands of tonnes of pigmeat placed in cold stores in the first three months of the year in anticipation of Brexit disruption that never came. That dampened prices, he said, also referring to weak demand. But he insisted the increases would come, without putting a timescale on it.

For many producers, this explanation does not give the full picture. The NPA noted, for example, the news that Cranswick posted profits of nearly £90 million in 2018/19, helped by a surge in exports to Asia in the early part of this year.

NPA Chief Executive Zoe Davies said: “What I don’t understand is why processors weren’t having the same conversations with retailers about UK product that their EU counterparts were having weeks ago on the expected price increases.

“There also appears to have been little effort made to attract lucrative business from food service companies who are also feeling the pinch, seeing as they import most of the product that they sell through restaurant and catering outlets. The processors could have made a killing here if they were canny enough.

“This isn’t your typical EU rapid price rise followed by a crash that we have seen many times before – this is an unprecedented event that will continue for as long as ASF continues to run out of control and the Chinese public still wants to buy pork.”

Mr Lister added: “There is a lot of catching up to do. Tomorrow is just not good enough. We should be getting more now.

“We have spent the last 10 years being told the price can’t go up further because Europe is too far behind. There is no premium now and Europe is well ahead of us, but we are now told prices can’t go up for another multiple set of reasons, from Brexit and the inability to empty stores to weak demand and a lack of China certification. It is very difficult to know what to believe and where we stand.

“As the rest of the EU’s pig producers return to profitability on the back of China’s escalating ASF problems, pig producers in the UK continue to face mounting debts and increased borrowing.

“The level of frustration and anger continues to grow – the reassurances that increases are around the corner mean very little.”