“The loss of most export markets outside of the EU presents significant challenges with carcase balance, particularly for offal products. Staffing levels also remain a difficulty in German processing plants,” she said.

“Reports indicate that prices in Belgium, Denmark and the Netherlands have also experienced some downward pressure, though not to the same extent as in Germany. Low priced pork from Germany is undercutting other suppliers within Europe, though the extent to which processors will be willing to buy this pork remains to be seen.”

The upside is that processors with access to China now face the prospect of reduced competition on this market, which may prove price supportive.

“As a large exporter, Spain particularly stands to benefit, though freezing capacity may limit the volumes that can be traded,” Ms Wilkins added.

The original wild boar carcase was found in Brandenburg state, which is in the eastern part Germany, surrounding Berlin. By the end of last a total of 13 cases close to the original one and within the restriction zone had been confirmed.

The Friedrich-Loeffler-Institute, the country’s National Reference Laboratory for the virus, has warned that the outbreak is still in its early stages.

Bradenburg is not the most pig-dense part of Germany, containing about 2% of the overall national herd in 2016 (150,000 head) and about 4% of the breeding herd (45,000 head), according to Eurostat figures, Ms Wilkins said. 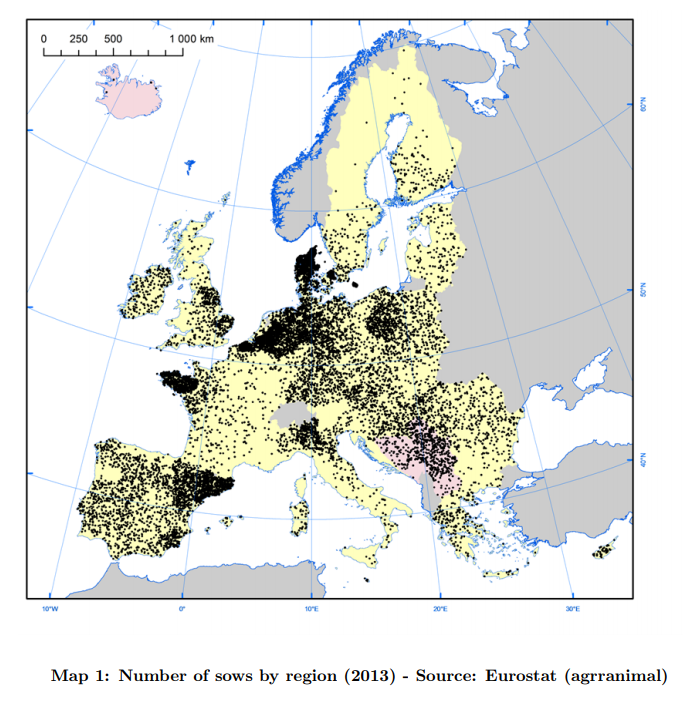 AMI report that slaughter in eastern Germany totals about 7 million head annually, whereas overall German pig slaughter is in excess of 55 million head.

Reportedly, 1.2 million pigs were slaughtered in Bradenburg last year, with Vion operating a large plant in Perleberg. This plant is still about 300km from the location of the infected wild boar carcases though.

The only other large plant in Eastern Germany is a Tonnies plant in Weißenfels, which is also nearly 300km away. This plant reportedly slaughters 4.6 million pigs annually.

“Interim protective measures are currently in place in the area surrounding the boar carcases, before the formal regionalisation is confirmed,” Ms Wilkins said.

“However, as the EU does take a regional approach to ASF-related trade restrictions, and so far, it seems there are relatively few farms near to the outbreak, the number of farms directly affected by restrictions may be low too.

“Of course, this depends on if, and where, other cases are found. Nonetheless, at present it looks like pig supplies will remain similar, though trade in this pig meat will largely be limited to within the EU.”