Asda was shown to have slightly increased the proportion of British pork and ham on its shelves, up 3 percentage points to 40% and 83% respectively. But, overall, it remains bottom of the pile across the categories. Tesco made some improvements in bacon and ham, but stays in second place when it comes to the proportion of imported products on its shelves.

Overall, the September survey showed little change on the July survey in terms of the proportion of British product on display. It showed British labels on:

You can see the full results from the September survey here

For the first time, the September survey measured the proportion of British pigmeat products sourced for both branded and own label lines across each of the 11 retailers surveyed. There were big differences between the pig meat categories covered by the survey:

Pork: The proportion of British pork sourced was the same for branded and own label categories at 78%.

Bacon: Only 48% of own label bacon was British compared with 78% British for branded bacon products.

Ham: However, the opposite was true of ham, with 67% British own label versus 50% British branded.

Sausage: For sausage, nearly all, 99%, of own label sausage was British, compared with just 49% for branded.

NPA chief executive Zoe Davies said: “Once again, we thank those retailers that continue to back British pork and make its great taste and high standards of production a positive selling point to their consumers. We urge those lagging behind to follow the example being set by their competitors.

“This is the first time the survey has differentiated between own label and branded products and it certainly makes interesting reading, particularly where bacon is concerned.” 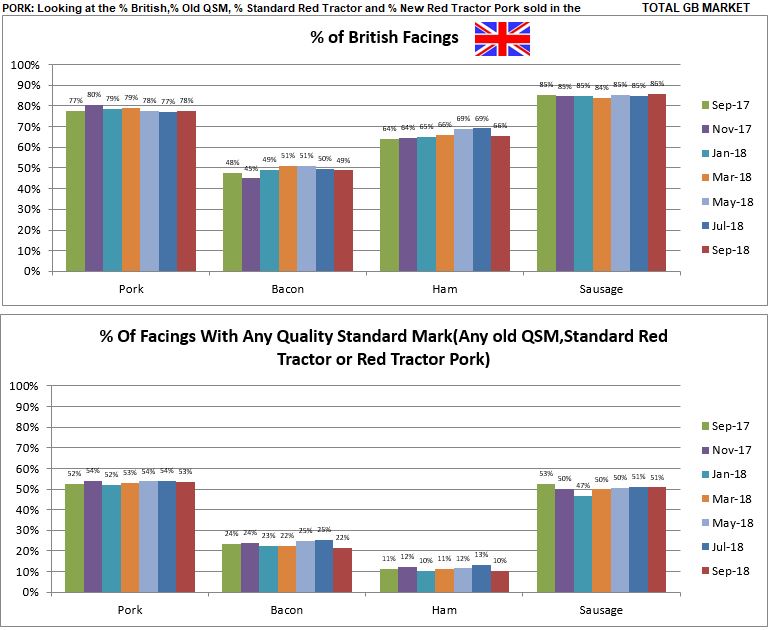