Freya Shuttleworth, AHDB analyst for dairy and livestock, noted that a limited butchery capacity in abattoirs is continuing to make throughput a challenge, but easing in Covid restrictions may cause an increase in capacity going forward. 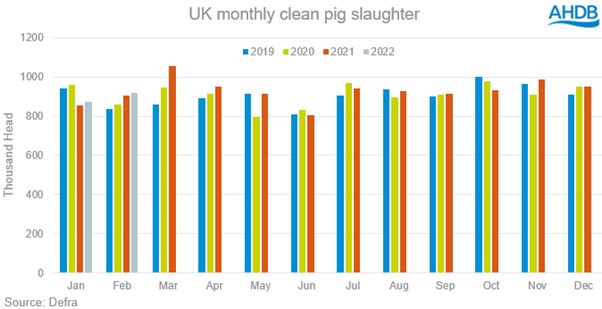 Average carcase weight for February was 94.0kg/head, down 0.3kg head from January, but 4.5kg/head heavier than a year ago and 7.7kg/head above the 3-year average.

Ms Shuttleworth commented: “These heavier weights are one of our best ‘real time’ evidence of the backlog of pigs on farm, as producers are compelled to hold onto pigs for longer, and with little reduction it indicates little progress has been made on reducing the backlog through slaughter.”