Sow productivity is expected to continue moving up in line with long-term trends, although this could be compromised as farmers focus on reducing antibiotic usage, Ms Wilkins added.

Combining the two factors, AHDB estimated in October that UK slaughterings would increase by 2% in 2018. However, 2017 Quarter 4 output came out higher than expected higher than expected, suggesting the year-on-year 2018 rise could be as high as 3%. Again there is a caveat, as this could be checked by seasonal infertility in the second quarter, Ms Wilkins said. 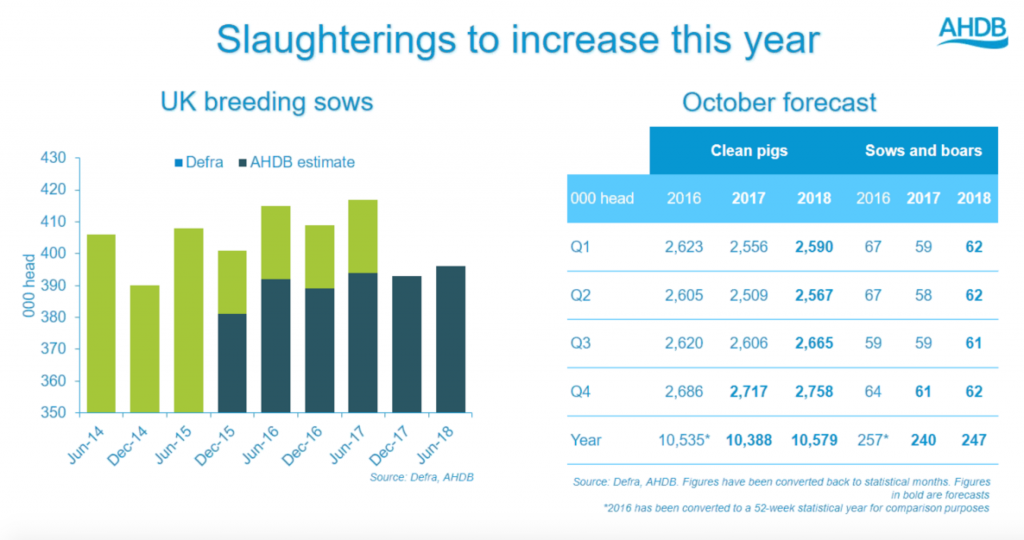 Carcase weights are also rising – another long-term trend, reflecting improved genetics and a move towards heavier finishing weights. Overall, AHDB forecasts a 2.5% increase in UK production to 925,000 in 2018, albeit with a significant degree of uncertainty added in.

Imports are also forecast to rise, albeit modestly, on the back of increased EU production, notably for the first time in a while in Denmark, and a ‘crowded’ global export market, as US and Canadian expansion increases global competition and the Chinese market is set to remain challenging. 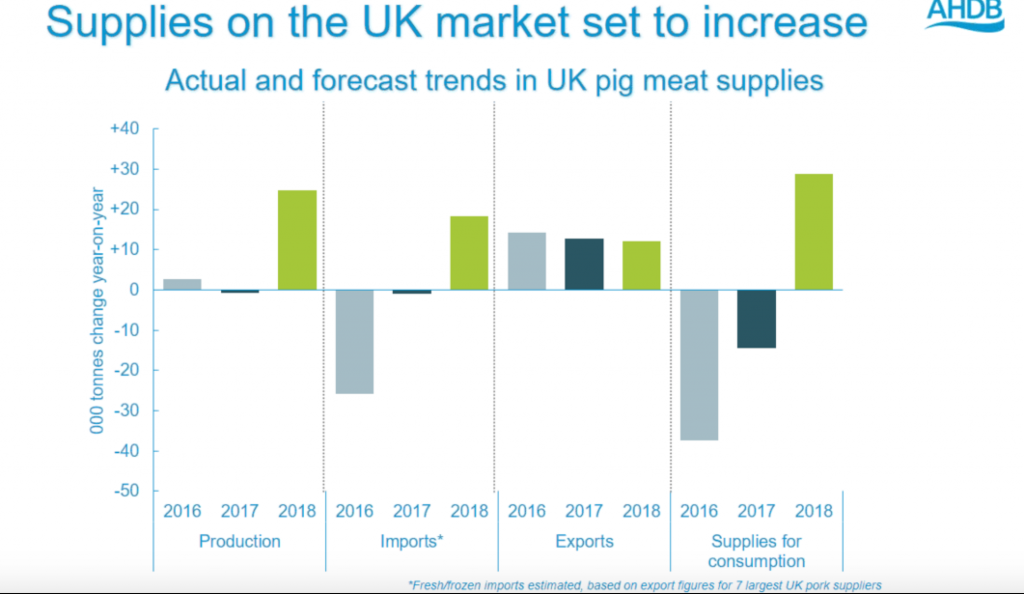 “Overall, there is likely to be more pork available for consumption in 2018, suggesting prices will remain below the highs of 2017,” Ms Wilkins said, adding that the strength of demand at home and abroad will determine where prices end up.

Exports are also forecast to rise, on the back of higher availability, the favourable exchange rate and the growing reputation of the UK product, including in the ‘hotly contested’ Chinese market. AHDB predicts exports will rise by 4% and, in volume terms, by a greater amount than the forecast increase in imports.

This would be represent further progress following the 4.8% rise last year in export volumes to 216,000 tonnes, worth £293 million.

There was also better news on demand for British pork. Domestically, demand for fresh and frozen pork fell by about 1% in 2017, but there were encouraging signs in the last few months of the year, as consumption and retail prices rose.

After a long period of falling demand, there are signs we have ‘turned a corner’, with AHDB’s Midweek Meal marketing campaign likely to have been a factor. She is optimistic the upward trend will continue this year.