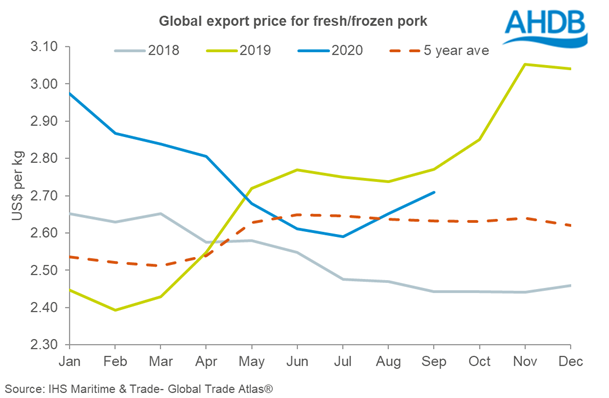 Uplift in pork export prices during the third quarter of the year varied across the four main exporting regions.

Prices were highest for EU exports, averaging $2.99/kg in September, a 3% increase compared to July – a different trend to that seen in EU farmgate prices, which declined by 10% across the same three-month period.

The US export price showed less movement across the third quarter, reaching just $2.42/kg in September, less than 2% more than in July.

Brazilian pork exports were the cheapest amongst the four main exporters, at just $2.31/kg in September

And Canadian prices also rose sharply during the quarter, reaching $2.55/kg in September, 6% more than the July average.

A number of challenges affected the availability of product for export during the quarter, which likely supported prices at export level, including some plants being unable to export to China for a period due to COVID-19 outbreaks, Germany discovering ASF in its wild boar herd mid-September, and constrained processing capacity leading to pigs backing up on farm in some key producers.

Ms Wilkins added: “Overall, strong Chinese import demand against a backdrop of challenges in supplying the market from the main exporters enabled the boost to export prices. This may be a continuing theme in prices during the latter portion of 2020, when data becomes available.

“Nonetheless, price support from export markets won’t necessarily feed through to farmgate prices, if markets remained challenged by excess volumes that cannot be exported. This is a particular challenge for the EU market of course, as Germany remains unable to access the Chinese market.”